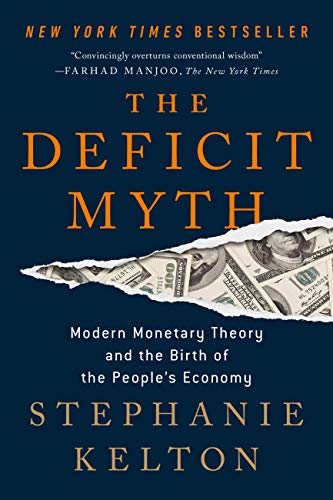 Let me start with a definition:

“Modern Monetary Theory (MMT) is a heterodox macroeconomic framework that says monetarily sovereign countries like the U.S., U.K., Japan, and Canada, which spend, tax, and borrow in a fiat currency they fully control, are not operationally constrained by revenues when it comes to federal government spending.

Put simply, such governments do not rely on taxes or borrowing for spending since they can print as

much as they need and are the monopoly issuers of the currency. Since their budgets aren’t like a regular household’s, their policies should not be shaped by fears of rising national debt.”—Investopedia

The word “heterodox” means outside the mainstream. And MMT is indeed not mainstream when it comes to an understanding of the U.S. budget. Perhaps that is why I decided to learn more about it.

Several years ago, I read a few articles about MMT. Those articles gave me enough of an understanding that I stopped worrying about the U.S. national debt. When I attempted to explain to others why the deficit itself isn’t a problem, they responded with skepticism. I decided to educate myself further and, coincidentally, my son recommended this book as a beginning to understanding MMT at a deeper level.

He was correct about this being a cogent explanation of a complex topic. Kelton explains the theory, but she also clarifies why it is difficult for most people to understand the concept.

The concept is simple, and the above definition of MMT contains the answer—money issuers do not have the same constraints as money users. Our households, businesses, and state and local governments are money users. We have to earn or borrow money before we can spend it. That is known as the (TAB)S in the governance world: Tax And Borrow before Spending.

For the money issuer, however, the formula is S(TAB). The truth is, the U.S. government doesn’t have to tax or borrow at all if it doesn’t want to do so. We will always have taxes, but they are not used to pay for federal government spending. Instead, they are used to manage the U.S. economy. Taxe policies are used to transfer wealth, encourage certain kinds of investment or production, and discourage other activities such as corporate parking their earnings overseas.

I believe that Kelton and the other economists who embrace MMT are correct. There is no reason that we should expect the federal government to manage the budget the way money users are required to manage their budgets.

When a federal politician claims that we “can not afford” a particular program or demands to know how we will pay for it, they are either ignorant of the advantages of a money issuer or counting on us not understanding the situation. The federal government can fund whatever it chooses to. The politician may believe that a particular program is not good policy, but to claim we can’t pay for it isn’t very ethical.

There is a Limit

There is a limit to how much money the federal government can pump into the economy. That limit is inflation. When the inflation rate, caused by an inability of the private sector to produce the goods and services in demand, is too high, then the government should stop spending, start taxing, and watch that employment is at the appropriate levels.

The key is employment and how many dollars are chasing the goods and services. In a perfect world, we would have full employment, production at capacity, and taxes that keep all that in balance. Of course, that will never be the case, so there will always be fluctuations in government policies.

Kelton has done an excellent job of explaining how the U.S. federal government budget works. Also, she explains trade deficits and how the feds do not borrow money from other countries (Japan and China have not lent us money despite what you hear in the popular press). Kelton does all this with precise, easy-to-understand language. She also presents the details in a logical fashion that should make sense to any layperson interested in learning about a modern, fiat currency-issuing government.

She should have quit writing at about Chapter 6, which explains the final myth. The last two chapters are a vision of programs Kelton would fund through the federal budget. That changes the conversation from a technical discussion of MMT to a political debate about our society. I believe that will negate the essential concepts of MMT for those with different priorities for the federal budget.

The bottom line is that those concerned about the federal deficit should read this important treatise on Modern Monetary Theory. Those with more conservative thoughts on how government should be involved in the economy might want to skip the last two chapters. As I mentioned above, we can all become more honest by understanding that we can fund anything we need or want to support as long as we keep inflation under control. Instead of claiming we cannot afford a program, we can come clean that we do not believe in that kind of program. Honesty and accuracy are a good thing in my book!

If the author had left out the last two chapters, this would have been a 5-star review.