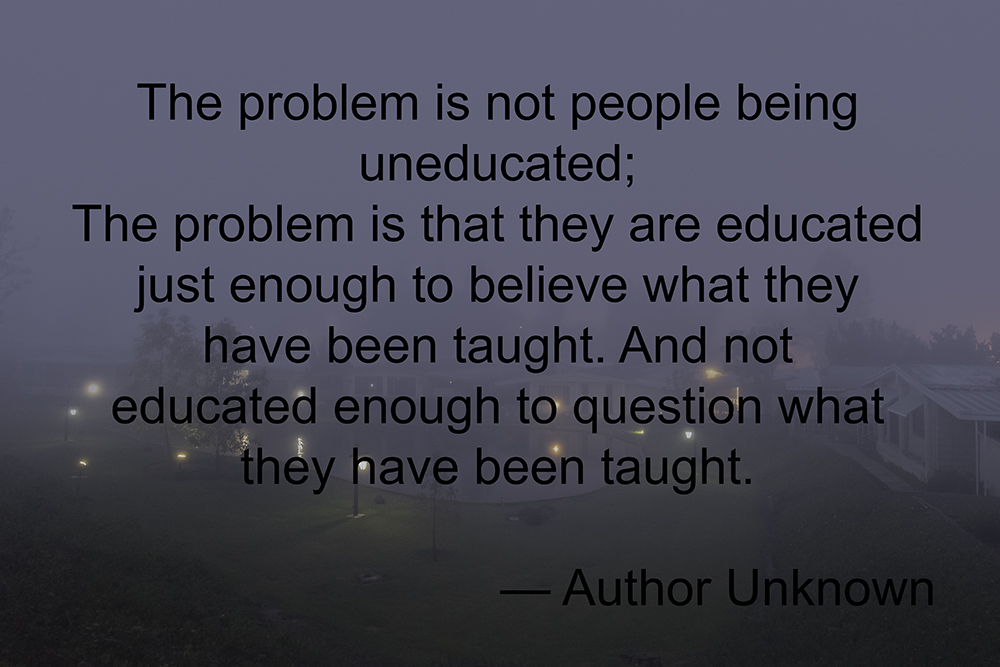 I’m struggling a bit with my thoughts on how to prepare people, especially our young people, for the work world ahead of us. Indeed, some necessary skills will be required. But which ones? It is next to impossible to predict what “jobs” will exist, let alone what skills will be needed.

Surely, we will be required to work with and understand technology at a user level. More importantly, we will need employees to be critical thinkers. We will need people who are “hungry.” Self-starters. And for the entrepreneurs and/or independent contractors, they will need even more resilience and focus.

This is definitely going to be a challenge for our traditional school system. For those who are interested, here is a timeline of education in the U.S. that can give an overview of major milestones and influences. What’s important to me, however, is what structure and goals were set for our present system.

It’s a factory-model classroom. Inspired in part by the approach Horace Mann saw in Prussia in 1843, it seemed to adequately prepare American youth for the 20th-century industrialized economy. But in 1983, the federal government declared in A Nation At Risk that our system was starting to slide.

In my view, not only is the classroom structured around the manufacturing model, it prepares students for a manufacturing/industrial economy. Obviously, our economy is shifting to service rather than humans doing manufacturing. Technology, by automating manufacturing, has disrupted the kind of talent and skills education must address. We now need people who can work alongside intelligent machines.

Happily, there is a movement toward Self-Directed Learning. From what I can figure out, this relatively new movement is being implemented mainly by parents who are skeptical of the public education system. It’s not the old style homeschooling that still prepares for tests. Instead, the children are 100% responsible for what they want to study. No prescribed courses. No set times for different disciplines. The natural curiosity so deeply ingrained in all children is fostered, not squashed.

However, I don’t see how that system can possibly scale up the way we will need it to. It’s hard for me to imagine that every parent can or will want to devote massive amounts of time to the education of their children. So we will need to integrate the best of both systems into an efficacious way to educate our children for the 21st century and beyond. The system we create will have to adapt and change at a rapid rate. There is no choice.

Parts of Self-Directed Learning are already being brought into today’s classroom, but it takes a great deal of patience and understanding. I find it incredibly easy to spend hours going down one rabbit hole after another as I’m researching and studying various topics. I can imagine many students would do the same. Is that really bad? Not in the new economic context.

Breaking ourselves of the habit of teaching to tests, using tests to try and measure success, and trying to hold one person (teachers) accountable for another person’s learning (kids) is difficult at best. Our present system is a broken system for the modern economy. Do we have the fortitude to change?

Can we set the example for our kids and allow ourselves to admit that rabbit holes aren’t necessarily bad? Can we go at least part way down a new rabbit hole of Self-Directed Learning? Can we, most of whom had creativity and curiosity beaten out of us, become curious and creative again?

I believe our future depends on developing a new and more effective learning system for our young people. We don’t have very much time, either.