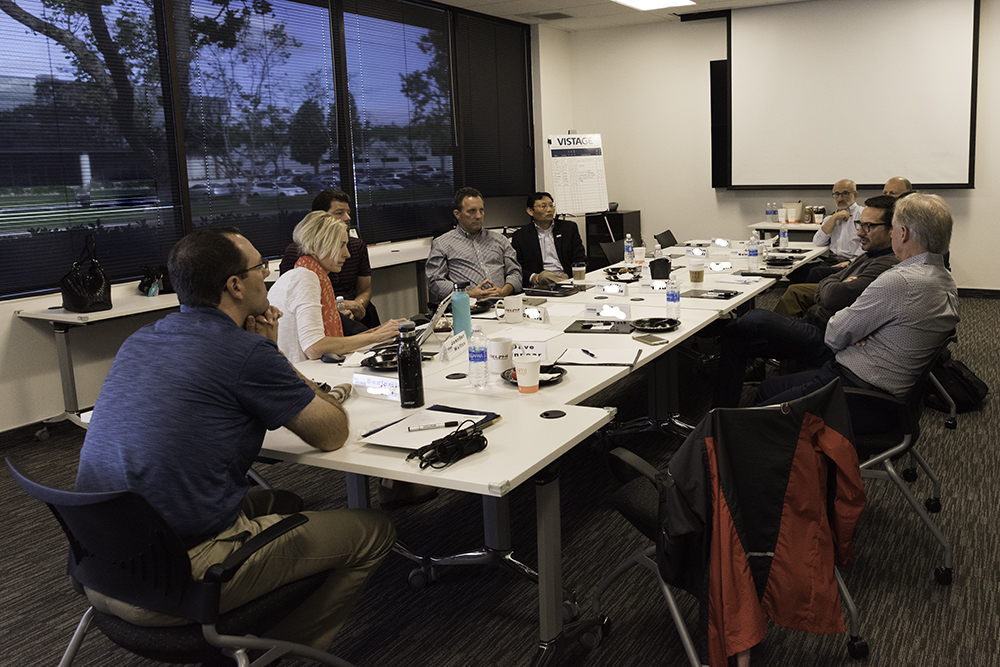 But continuous learning, a willingness to explore new ideas, and a penchant for disrupting our own business is definitely a competitive advantage. If, as leaders we believe we have nothing to learn from others, then we will undoubtedly be disrupted from outside the organization.

The species that is most adaptable to a changing environment is the genetic winner in the lottery of life. They have an advantage. Darwin’s theory is often misquoted as being the survival of the fittest. But in actuality, he and we understand that it is the most adaptable that survive. That is true for us today, and it is especially true in business. It is adapt or die for us.

In the image above, a group of business owners, professional executives and community leaders gather to learn from and help each other. This is a huge competitive advantage for them. I know each of them well, and they are truly willing to listen and learn from colleagues. They cherish the diversity of industry and experience.

Here’s a great example of how diversity helps avoid group think. I very much appreciate what, according to Bryce Hoffman in American Icon, what Bill Ford had to say about how he wanted someone from outside of Detroit to help turn Ford around. Two things stand out for me in this part of the story. First is that Bill Ford was ready to admit that he wasn’t the leader to turn Ford around. He knew his limitations. Second was that he recognized the group-think that was the bane of the American auto-manufacturing world. He knew he had to get outside influence and experience. It took him two years, but he finally convinced Alan Mullaly (of Boeing fame) that he was the leader to help turn Ford around. And to Mulally’s credit, he did exactly that with the existing Ford leadership team!

Mulally knew that he was an aerospace leader, not an automotive leader. So he determined to take the Ford leadership team, at the time mostly dysfunctional, and turn it into a high performance team. The rest is history. The turnaround was successful and Ford was the only one of the “big three” U.S. automotive manufacturers that did not take advantage of the government bailout program.

Leadership is a learned skill. We need to recognize the need to have all our employees, including our leadership team, on a continuous learning path. Ideally, continuous learning is a part of the corporate culture. To my way of thinking, that is the only sustainable competitive advantage.

So the question for leadership teams is pretty straight forward — Are you investing in long term sustainable competitive advantage by developing everyone in the organization? Do you have a culture of continuous learning?