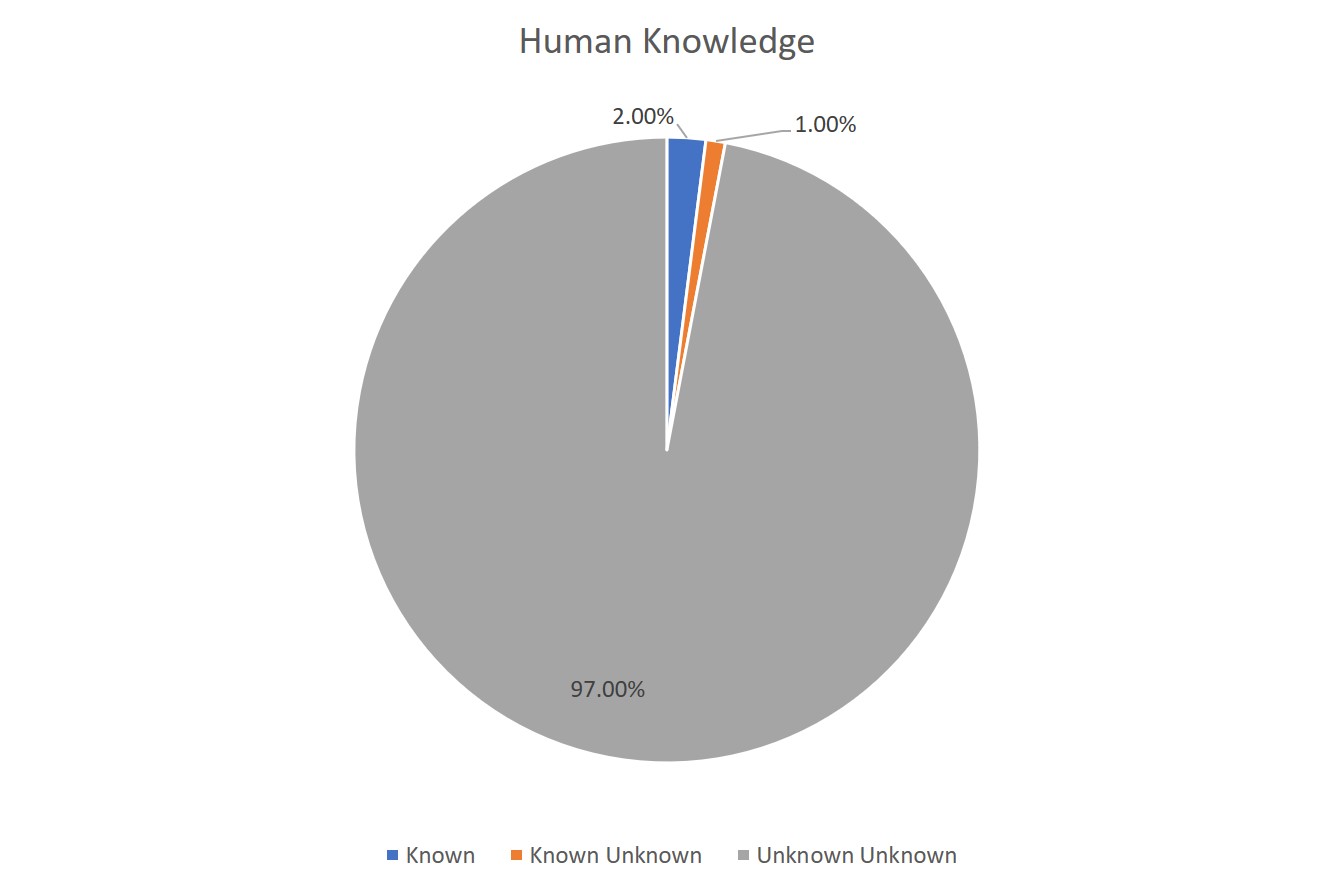 On a recent flight, I was listening to Sam Harris interview Eric Weinstein and Ben Shapiro. One of the (many) topics they touched on was reason. According to my notes, the comment was made that:

“Reason maps onto reality. Which is why it’s reason.”

That comment made me go down the age old rabbit hole of how we discern reality. What do we really know? What do we know we don’t know? And how much is “out there” that we have no clue is there and so have no way of realizing that we don’t know about it?

“Reports that say that something hasn’t happened are always interesting to me, because as we know, there are known knowns; there are things we know we know. We also know there are known unknowns; that is to say we know there are some things we do not know. But there are also unknown unknowns – the ones we don’t know we don’t know. And if one looks throughout the history of our country and other free countries, it is the latter category that tend to be the difficult ones.” — United States Secretary of Defense Donald Rumsfeld at a U.S. Department of Defense (DoD) news briefing on February 12, 2002

In the beginning, many of my friends thought this was a ridiculous statement. I’m not sure why they thought that. And I started questioning my own response. Which was that it was a clever way of pointing out that we humans are often ignorant about and, of course, blind to what we don’t know. Often, that’s what bites us in the butt. And it isn’t a new concept.

The idea of unknown unknowns was created in 1955 by two American psychologists, Joseph Luft (1916–2014) and Harrington Ingham (1916–1995) in their development of the Johari window. They used it as a technique to help people better understand their relationship with themselves as well as others. I find the Johari window applies to many situations in our lives.

I like to believe I use reason when I think about evaluating situations, solutions and challenges. However, another statement made in the Harris podcast brings me up short.

“Departure from reason is when you believe something you really don’t know.” — Sam Harris

In the image above, I tried to depict my own concept of how little we actually know in comparison to all the body of knowledge to be known. To be sure humans are expanding the section of the pie chart I refer to as “known.” And as we go through more discovery, we also expand that which we know we do not know. We also find that what we thought we knew to be true is often either flat out not true, or is incomplete knowledge.

How many things do I believe—things that I take as “known”—which are actually assumptions? What I think is reality someone else may believe is a myth.

As leaders, we do need to make sure our teams execute on our plans. Thus, on the one hand, we cannot allow analysis paralysis. On the other hand, we must also be ready to change our perception of reality. Even as we apply reason to our planned actions, we must consider that what we think is reality may well be largely assumptions or approximations. I am reminded that Newtonian physics turns out to only approximate reality in our physical world. Quantum physics put the spotlight on those approximations. Consequently, we have changed our perception of what is true about our physical world. Therefore, reason must also adapt in order to map onto the new reality.

“The whole problem with the world is that fools and fanatics are always so certain of themselves, and wiser people so full of doubts.”— Bertrand Russell

The trick is to be that wise person who is full of doubt AND at the same time, move forward toward achieving our objectives. I believe this is where true humility, and a growth mindset, will be required for effective leadership. Leaders embrace the mystery of the unknown unknowns.