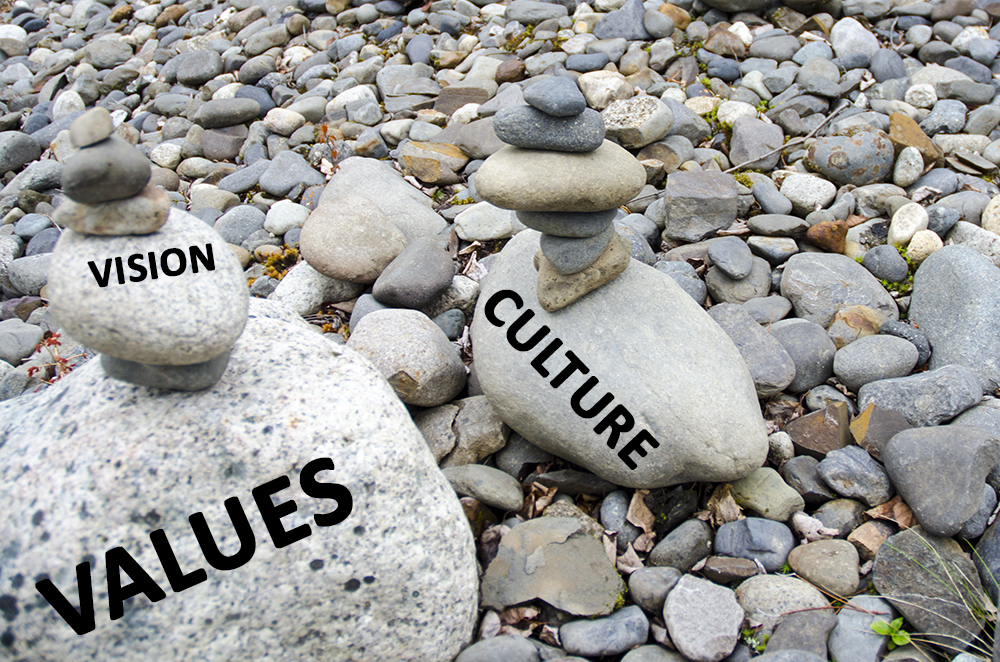 I often think of the Covey story about putting the big rocks in the beaker first, then the small stones, then the sand and finally the water. See, the problem is, if you do all the little things first, there isn’t enough room in the day for the big important things.

“In business, too, there are no truly “big things”— only the constant accumulation of little things that need to be done at a high level of execution.”

As Carey Lohrenz stated, there really aren’t any “big” things per se. We almost always have no choice but to break the big tasks into little tasks. We wind up paying attention to details if we want to get the job done in a quality way. I don’t mean micromanage. I mean making sure we understand what goes into the big task and giving control (autonomy) to those who understand the real details best.

Part of our responsibility as a leader is to make sure that while everyone is paying attention to details, those little stones, that we don’t lose sight of the big picture.

I’m always amazed, at the end of the day, how much of my time was used paying attention to the many trivial things instead of on the significant few things that needed to be done. And today, I have exponentially more trivial interruptions — E-mail, Text Messages, Voice Mail, Phone Calls and “drive by” office visitors. To my way of thinking, the culture in the organization is analogous to the beaker in the Covey story.

When in the corporate world, I had to fight to get time to actually complete the assignments given to me. If I did not block out “Personal Work Time” on my calendar, I would find myself in meetings all day long with no time to execute. Now, in my home office, it’s the cats demanding attention that interrupt!

The One Big Stone:

I believe that the tyranny of the trivial many is a significant contributor to the lapse in corporate ethics. The one big stone that leadership must put before everything else is the stone marked “Values.” We get dragged into short term tactical tasks and the day goes by without having made any significant progress on reinforcing values and culture. The downward spiral is that by not paying attention to Values, which define the Culture, we find delegation more difficult if not impossible. That in turn means leaders tend to do more of the tactical work and less of the long term strategic work that needs to be done.

This large stone is also properly broken into smaller stones. The trick is to not lose sight of the fact that in working on those smaller tasks, we are completing a much bigger task. In this case, we are actively managing the corporate culture through continuously living out our core values.

What Got You Here:

My observation is that many leaders forget the great advice from Marshall Goldsmith — “What Got You Here Won’t Get You There!” It is common that we become leaders by rising through the ranks. That is, we performed mainly tactical tasks. We were “hands-on.” With each higher rung on the leadership ladder, we have to learn new skills and shed some, if not all, of the “old” work tasks we used to perform. The new skills will be more strategic and long term the further up the ladder we climb. At least, that will be the case in high performing organizations.

Successful leaders shift their focus from doing the work to getting work done through other people. That, of course, requires obtaining new skills. It is quite a different mindset (and skill) set to be responsible and accountable for your own performance as opposed to being responsible and accountable for a team’s performance. We fall back on our perceived strengths when we’re under pressure. We may see our strength as being really good at doing the work. But that isn’t what we are being paid for now. As leaders, we are being paid to build high performing teams and inspire them to deliver the value to stakeholders.

I love this parable:

Three men – all working at the same site, performing the same task – each had three very different perspectives of what they were working toward. Our responsibility as leaders is to make sure everyone on the team knows they are working to build a cathedral. And that our values require that we do so while affirming each person’s worth.