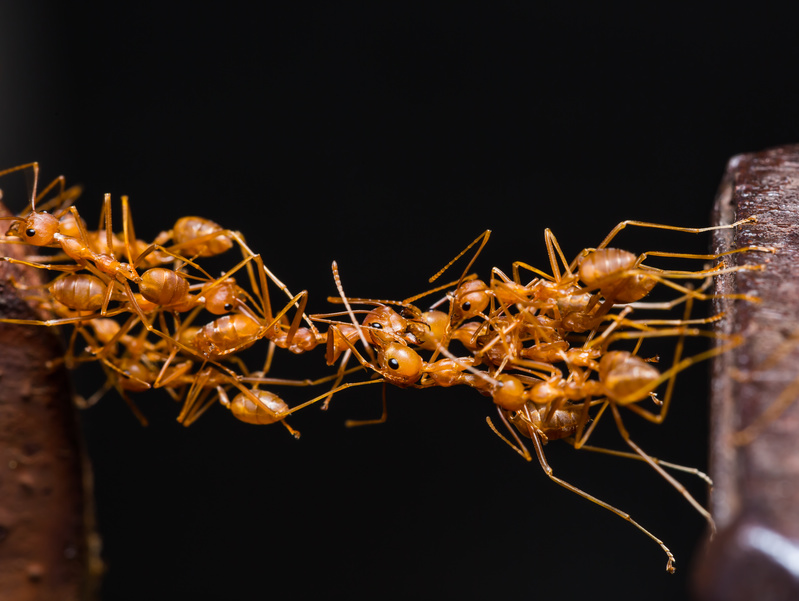 They seem so cool. I have been told that as a child, I would watch ants for "hours on end." It seems obvious to me that ants communicate, but I don't know exactly how. Perhaps it's chemicals and perhaps some visual signals.

At any rate, ants figure out ways to organize and get things done. They are not blessed (cursed?) with big brains. Yet somehow, in all their random activity, they organize and reach the goal of building community. They help each other and the community survives.

In his excellent book, The Ideal Team Player, Patrick Lencioni suggests that one of the attributes of a team player is "hunger." By this, he means that the person is always looking to improve things. Looking for the next exciting

project. Pitching in to help the team accomplish the stated goals.

Hungry people are the folks who, when they see a piece of trash on the floor, stop, pick it up, and put it in the trash can where it belongs. Hungry folks ask their leader, "What's next?" when they complete a given milestone.

One of the interesting things about a high-functioning team is that it will pick the leader. Ants, on the other hand, seem not to have a particular leader. They scatter about in random ways, and then when food is found by an individual, the ants organize themselves to secure the food. If their nest is threatened, they will organize to defend it, without a particular leader!

Humans seem to want to have someone take the lead. Given the chance, like ants, humans will self-organize and do their best to make sure individuals and the tribe or team survives. That's why it's important to have at least some folks on the team who exhibit Lencioni's idea of hungry. They are self-starters and will make sure what needs to be done gets done.

As a leader, then, we need to make sure we create and maintain an environment that allows our team members to do at least some self-organizing. And there needs to be room within the accepted policies to encourage autonomy.

Another way to say that is, we need a Common Law organization. Common law means that unless a particular action is specifically prohibited, then an individual can take that action. The opposite situation is Roman Law, where you can only do what is specifically stated is acceptable. Roman law is micromanaging, Command-and-Control. Common law is Intent-Based Leadership and autonomy.

There is a bit of chaos in common law and autonomous environments. When I'm working in such an organization, I sometimes feel like things are "out of control." And in a way they are. But, if the organization's values are honored, the vision is clear and the mission is attainable, the team somehow seems to get things done.

I frequently see this kind of teamwork in volunteer organizations. Somehow, the work that needs to be done gets done. It is often a bit of a mystery how the work actually got done, it just is done. Someone agreed to organize the effort. And interestingly, it usually is not the same person for each event, even if the events are "identical" events.

I have the honor and distinct pleasure of working with such an organization. Interestingly, it isn't even a legal entity of any kind. It's simply a group of folks that have agreed to do what needs to be done to help other organizations doing good things in the community. Personally, I find this group to be refreshing and amazing. Yes, there is a leader. A very reluctant leader. He sees his leadership task as simply making sure the values that brought the group together are always honored and that our actions uphold those values.

As is frequently the case for me, it was a podcast on ideas around lessons from the world of animals that got me thinking about the topic of leadership. And it fits in with my work with start-up companies and leaders of going concerns. It reinforces my belief that the only critical job a founder and/or hired CEO has is to actively manage the organization's culture. It also confirms my belief that a Common Law organization has the best chance of attracting the ideal team players and surviving over the long haul. Simply because it allows for the most flexibility for innovation.

How's your organization? Are you Roman Law and Command-and-Control? Or are you more of a Common Law and Intent-Based Leadership organization? With all the changes hitting our economy and wrecking our business models, which organization do you believe will have the best chance of survival? Personally, I'm betting on the ants.