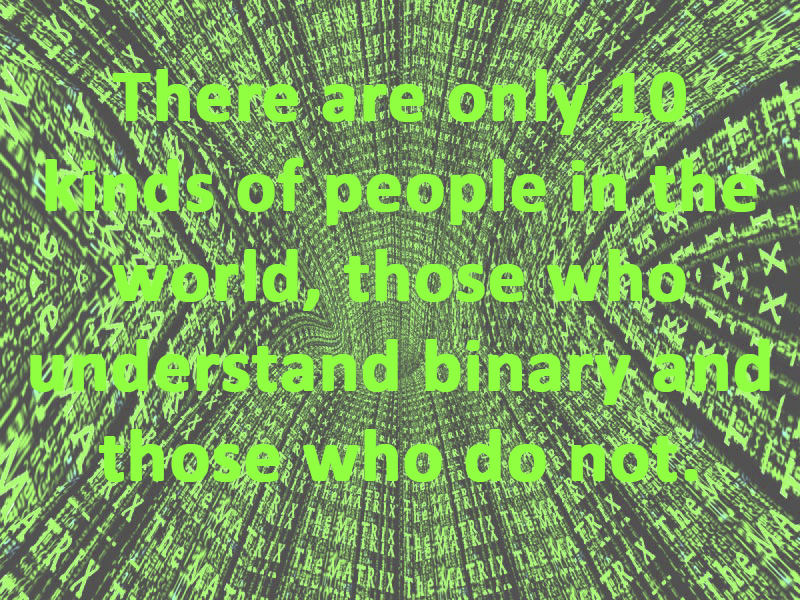 They say that “There are only 10 kinds of people in the world, those who understand binary and those who do not.” For the non mathematically inclined reading this blog, an explanation may be helpful. This joke mocks phrases that begin with “there are two types of people in the world…” and relies on an ambiguous meaning of the expression “10,” which in the binary numeral system — the language of modern computers — is equal to the decimal number two. And, people also say that most good jokes are based on at least 50% truth.

The Future of Work

The truth in this joke is no laughing matter. That is, as I have pointed out before, the growing digital divide. Quickly we are bifurcating into two (or if you prefer, 102) kinds of people in this world, those who can comfortably work side-by-side with intelligent machines and those who cannot. For the time being, those who can do so are enjoying a considerable pay premium over those who cannot.

In his excellent book, The Industries of the Future, Alec Ross goes into great detail regarding the changes that have already occurred and those he predicts will come.

Unlike the previous wave of digital-led globalization and innovation, which drew enormous numbers of people out of poverty in low-cost labor markets, the next wave will challenge middle classes across the globe, threatening to return many to poverty. The previous wave saw entire countries and societies lifted up economically. The next wave will take frontier economies and bring them into the economic mainstream while challenging the middle classes in the most developed economies. —The Industries of the Future, by Alec Ross

It seems we are finally starting to write, read, and have discussions about this issue. Yet we still have folks on both sides of the political aisle in or running for elective office making absurd promises (creating thousands of new jobs, bringing back thousands of jobs that were off-shored) which fly in the face of these realities. We know jobs are returning to the US. However, far fewer jobs return than left due to the automation of factories. That automation is what is enabling the cost-effective return of the jobs in the first place.

I, for one, do not believe that the results are inevitably destructive. I do think we will be (and are) going through some very stressful times. I am concerned that we are not moving fast enough in recognizing that old business and economic models, old measurements and key performance indicators, and calcified mental attitudes must change — and quickly. So I turn to leaders because that is what we need now. We need leaders with a vision, a realistic picture of the future—not an image of holding onto the past.

I specifically think that leaders in business are in a particularly good position to show how to move things forward in a meaningful way. We are in a place to help employees learn how to work with intelligent machines — Pink’s “mastery” component for engagement outlined in Drive. Yes, we will inevitably replace some people with machines, but not all, and not all at once. Business leaders can work in the public sector to influence support for educating young people to be prepared for the new workplace. A workplace where the flood of information bypassing upper and middle management and going right to the “front line worker” for action, is commonplace — Pink’s “autonomy.” And of course, the vision that we are all working to create a better world (the global market is here to stay for workers as well as markets) can start within the business domain and spread to the rest of society — Pink’s “purpose.”

I am optimistic about our future, but only if we eschew holding onto the past and get to work. I agree with Abraham Lincoln, “The best way to predict your future is to create it.”