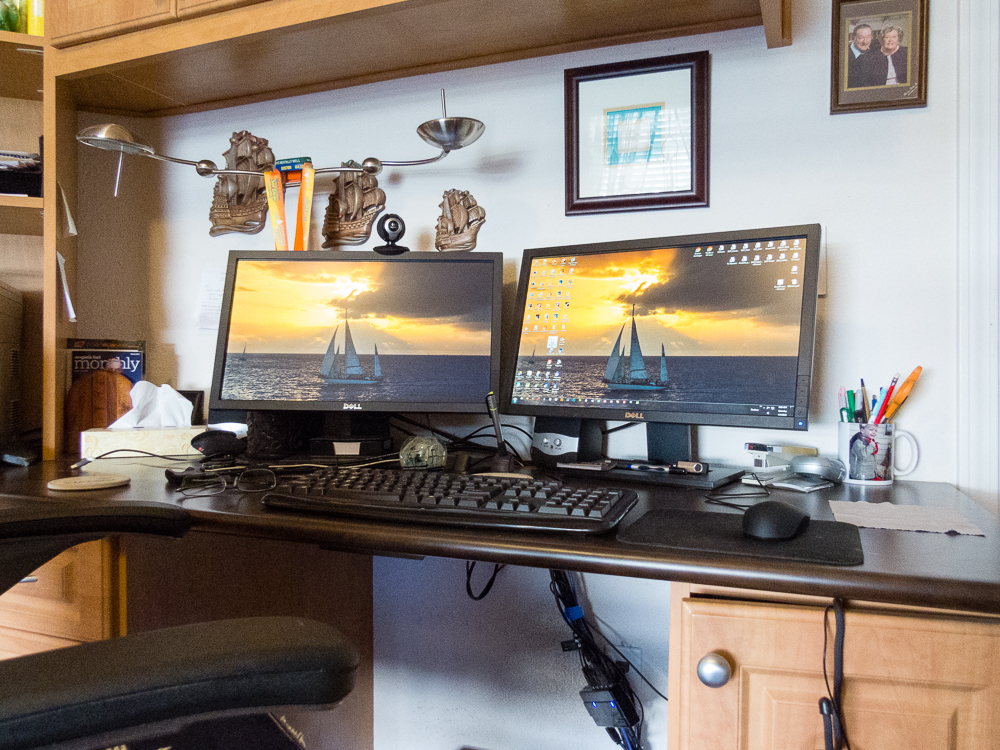 <Nerd Alert> I have “always” enjoyed the challenges of technology. Well, at least since the time I was twelve or so and went to “work” at my father’s boiler construction company during summer breaks. The technology was decidedly “low” tech—pipe wrenches, pneumatic drills, heavy electric machines for threading pipe, acetylene torches, electric arc welders, and the like. But I think that experience instilled in me a curiosity for how things work and how to “fix” them when they don’t work.

But then, as I enrolled in college, I discovered electronics and

computers (yes, punch cards, Fortran programming, and mainframe computers). It’s been a love affair ever since! From the day my long time girlfriend and I married (between my sophomore and junior years in college), she has had to put up with my love affair with technology. In the beginning, she dealt with many late nights at the college computer center, where I programmed for the school. And then long days and late nights as I worked in the semiconductor industry. Ever since the early ’80s, she has had to endure new hardware purchases every two years or so and new software purchases even more frequently.

What you can’t see in the image above is the actual Workstation or Central Processing Unit (CPU) I custom ordered. It was the “latest” and “biggest” I could order from the manufacturer at the time (12/2011) and cost in the neighborhood of $3K. I certainly can’t justify spending that kind of money for the “normal” work I do (Internet, Word Processing, E-mail, and an occasional spreadsheet). I can only barely justify the cost based on what I liked and wanted to do outside of my work (some digital image processing).

My latest shenanigan is out there at the bleeding edge of the new hybrid tablet computers. Again the price point is about $3K. What I’ve ordered (not due to be delivered until about February of 2016) is the “biggest,” “fastest,” and most advanced model of what the manufacturer has to offer. It comprises the latest Intel Processor (for those who care, Core i7 Skylake), the fastest processor speed I could order, 16 Gigabytes of RAM, and 1 Terabyte of solid-state storage. Whew! I can now more readily justify the hardware on the expanded digital image processing that I do, which has picked up steam in the last four years since the Workstation purchase. But really? Justified? Yes, as long as I admit its want and not need!

I have a couple of observations from the last 30 years of purchasing the latest hardware and software. First is that out here on the bleeding edge of technology, it is relatively expensive. My first personal computer cost about $2.5 K and was a 640K Byte, 5.25-inch Floppy Disk with a very slow (kilohertz) 8-bit processor affair. Pretty interesting, and I could even run a spreadsheet on it! Amazing. The next one had two floppy disks, perhaps it broke into the megahertz range on speed, and I couldn’t imagine needing (okay, wanting) more than that. Boy, was I wrong! The price point stayed the same, and the capacity, usability, and functionality of the PCs just about doubled every two years. I, of course, was always at the bleeding edge of these advances. The expense for all this was hard to keep in the budget at the beginning of my career. Thankfully, my employers (and my wife) put up with it. </Nerd Alert>

Second is that the increased speed of the hardware enabled the use of increasingly powerful software. Keeping up with the software was a daunting task. In the beginning, one software wouldn’t “talk” with any other software. Productivity improved with the use of a PC but was not at all impressive. There were lots of re-keying tasks in the office. I distinctly remember discussing with my Executive Assistant how changing from typewriters to PCs and printers improved our communications tremendously. Little did I know that it would also mean the demise of Executive Assistants and facilitate the rising phenomenon of Executives doing all their own written communications—especially when e-mail became prevalent. The handwriting was on the wall, but I’m not sure many of us were paying attention to the trends at this early stage.

The Third thing I noticed was that in the work environment, the hardware and software changes came way too fast for proper change management and productivity gain. So my personal and business technology environments soon became decoupled. It was frustrating at times since I knew firsthand that a software package or particular hardware advance was a “game-changer.” But, I was unable to get the organization to adopt it. Maybe not such a bad thing as I look back, because the business needed to wring out as much productivity from what they had before moving to the “next best thing.” When computers were mainframes, the Executives had more control over the updating of hardware and software. When PCs took over, things were much more chaotic and much more challenging to manage.

A fourth observation is that each time I made hardware or software changes in my technology world, I took a hit on productivity. I’d lose days at a time as I “configured” the system the way I wanted it. Once that was accomplished, I’d have a relatively good run of high productivity until the next significant change came along. But I loved the challenge, and I was willing to put in all the effort because I grew my technical expertise and eventually was much more productive.

The speed of technological advances has only increased during this time frame, and as far as I can see, there is no slowing down in that acceleration. The need for organizations to quickly adopt new technological advances is accelerating. The pressure for humans to embrace change and continuous learning is undeniable. In this regard, the Millennial generation has a distinct advantage since they have only known a life surrounded by technology. It is a “natural” part of who they are. They learn new technology-based “things” quickly and easily. New software to understand? You will do well to give it to a Millennial; they will soon figure it out. New Social Media site to understand? Please share it with a Millennial; they will see the value. Of course, there are exceptions both ways on this. Some Millennials may dislike and avoid digital technology. Some Baby Boomers may love and embrace technology and easily understand its impact. Generally speaking, though, change is less of a problem with Millennials, and that’s a big “plus.”

I see technology causing more disruption in the future. Organizations are finally seeing the benefit of past investments in technology. We have not only to continue that investment, but we also have to accelerate that investment. That’s a bit scary for humans because much of that technology investment is in automation and artificial-intelligent software systems, which effectively reduces employment needs. Business leaders must make sure that they manage this transition in a way that allows a graceful transition to low employment demands. How are you and your organization doing on that front? Are you continuing to invest in technology to protect your position?