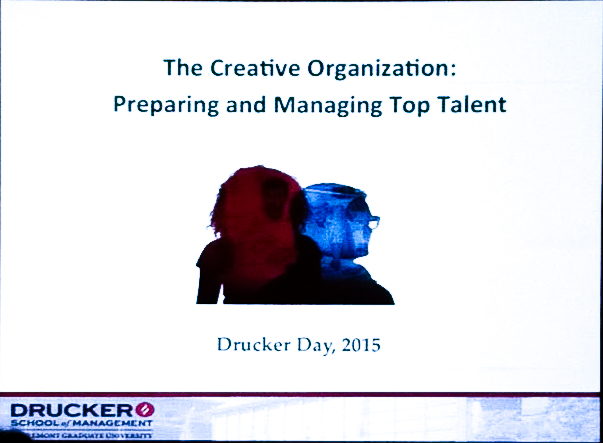 I had the good fortune of being able to drive up to Claremont California to attend the 2015 Drucker Day at the Drucker School of Management hosted by the Claremont Graduate University (CGU). The theme this year was The Creative Organization — Preparing and Managing Top Talent. It was a day well spent.

As you might expect, given the proximity to Hollywood, the “Creative Industry” was mostly focused on the TV, Film and Entertainment industries. But certainly not entirely. And the discussion around managing and developing creative talent cut across all industries. Those of you who know me will realize that this was an exercise in trying to break the cycle of confirmation bias. I am the TV and Film industry’s worse nightmare! I watch no TV/Cable productions, fast forward through any advertisements on my podcasts (video and/or audio) and am pretty “blind” to other advertisements. It was, to say the least, a day of learning and challenge for me.

All the speakers were CGU graduates and were excellent presenters. I won’t bore you with all the speakers and panelists, but will let you know that the two Keynote Speakers were: Morning: Eugene Young (EMBA 2011), President of Ryan Seacrest Productions who spoke on “Succeeding in a Time of Creative Disruption,” and Afternoon: Tawni Cranz (EMBA 2011), Chief Talent Officer at Netflix, who spoke on “Leading Creative Teams.” Both keynotes were noteworthy to me in that they emphasized how technology had totally disrupted the industry as their companies had known them.

“The best way to predict the future is to create it.” — Peter F. Drucker

Of particular interest to me is how Netflix drove the change to streaming video ahead of the customers. You may recall all the angst over the change in the DVD versus Streaming model and consumer pricing when Netflix made the move to streaming video rather than delivering DVDs. They did this in spite of an incredible amount of capital tied up in DVD production, duplication, and delivery systems. Huge databases to predict what consumers wanted to see were geared toward the delivery of DVDs. All that had to be obsoleted in order to move to the streaming side of the business.

“You must increase employee freedom as the business complexity grows.” — Tawni Cranz

For his part, Eugene Young pointed out how the whole industry (production of TV/Film entertainment) is in chaos due to the change in consumer demand for internet streaming of entertainment. Cord-cutting is real. The industry is being way too slow to respond to this threat to the business model. But, they are indeed aware and casting about for an appropriate response.

The lesson here, for me, is that the companies who are courageous enough to cannibalize their own products/services and move into the brave new world will do well. The other lesson for me is that we all, in the end, are trying to learn how to manage creative talent. Those of us NOT in the creative industry can certainly learn how to encourage creativity within a framework. That is how Netflix and others provide forward-looking products, services, and business models. They set guidelines and set the people free to be creative within that framework.

How are you doing at managing creative talent? Are you able to establish guidelines and set people free to be creative within them? Have you established a good process AND allowed for creativity? Seems like a challenging and worthy goal to me.