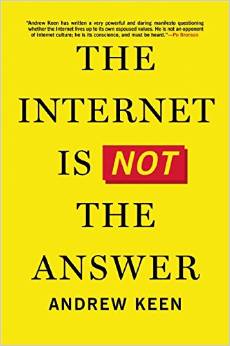 Andrew Keen is not keen on the internet and where it’s taking us. Keen has taken on the conventional wisdom that the internet is a democratizing force lending power to the little guy and disrupting the old school “bad guys.” A strongly opinionated polemic–the passion of the converted believer is palpable in his writing.

I come at this book with three “given” premises: (a) There is no human work endeavor that cannot be done by a machine – either already or relatively soon; (b) There is no way to stop technological advance – if it can be done, someone will do it and the rest will have to keep up; (c) Technology is now advancing on the steep part of the exponential curve. So while I may well agree with Keen’s observations and conclusions about the way things are right now, I judge that his diatribe is helpful only in that it may serve to ignite conversation about where we are going. That is a goal I can get behind.

Keen segmented the book well. Along with other topics, he separately addressed the network, money, and the Silicon Valley culture of celebrating failure. But it did not take long before I was bored with the same theme being repeated in each segment. So I was looking forward to getting to the chapter titled “Conclusion.” Sadly, I still had to slog through more demonstrations of who is lined up on his side of the argument and why. I was looking for a definitive answer, or at least strong suggestions of viable alternatives, and found none.

It’s a conversation that needs to take place in Silicon Valley, Silicon Alley, and the other centers of digital power in our networked world. The time is now ripe for this.

The above quotation is a conclusion which I and the many folks with whom I’ve been discussing this topic have already drawn. I’m thankful for the support, yet we haven’t moved the conversation forward with this book. To be fair, there were some “mild” suggestions including taking regular holidays from technology, refusing to shop on-line and other individual actions. Yet those suggestions tend to back-up the three premises rather than give us a viable way forward.

There is some hope for things not progressing too fast down the road to dystopia. Recent articles indicate there may be a move toward having my on-line purchases delivered to brick-and-mortar facilities. It seems that several “pure play” on-line stores are building out physical stores. That may be a welcomed compromise, but we will not stop the evolution and adoption of technology. Consumer convenience will definitely win.