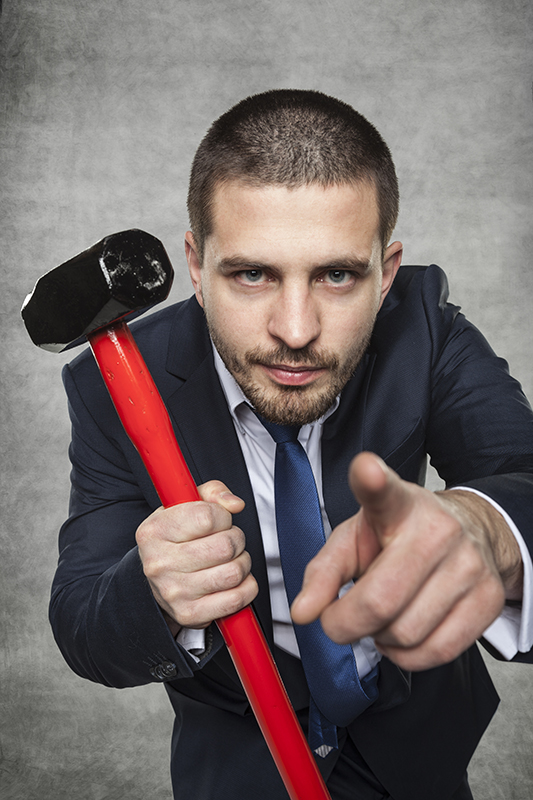 Anyone who has been on the leadership end of a large change initiative knows that there are some folks who appear to simply be “unpersuadable.” They are the “NO! Sayers.” Somehow, the leaders — especially the executive sponsor of the change initiative — must at least try to find a way to persuade them even in the face of it being seemingly impossible. Having been in that role several times, I can say I empathize with the gentleman to the left, who seems to have found a powerful tool of persuasion.

I’m fond of a saying by Karl Weick, professor at the University of Michigan. He states that you should “Fight as if you are right; listen as if you are wrong.” I have always been, am now and likely always will be pretty darn good at the first part. Boy, do I ever need help remembering the second part. And it’s critical if I ever hope to persuade people to adopt an idea, direction or an innovation that I, the company or the team need to implement. On more than one occasion when I was “on my game,” I listened well and learned exactly what was needed to find common ground for the change initiative at hand. An open mind is better than that sledgehammer.

On large change initiatives, we had an opportunity to experience possibilities with a “pilot run.” This is a small test environment that allows folks to see the new world in microcosm. It allows them to have input on improving the system. We, the leadership team, had to listen to the users as though we were wrong even though we were pretty convinced that we had already figured out what needed to be done in the new system. We were, of course, often wrong about that conviction. The tough part was that we wanted to change the business process and make it more effective. That is where persuasion was the biggest challenge.

In the end, the single biggest tool for persuasion is truly listening and finding common ground. Alas, sometimes, all the best efforts we make won’t convince some folks. They will likely need to find another place to be a “No! Sayer.” Otherwise, they will poison the hard work of the rest of the team.

How are you at listening as if you are wrong? Do you have as much of a challenge there as I do? (I hope not.) Is your organization one with a culture that allows and encourages such listening skills?