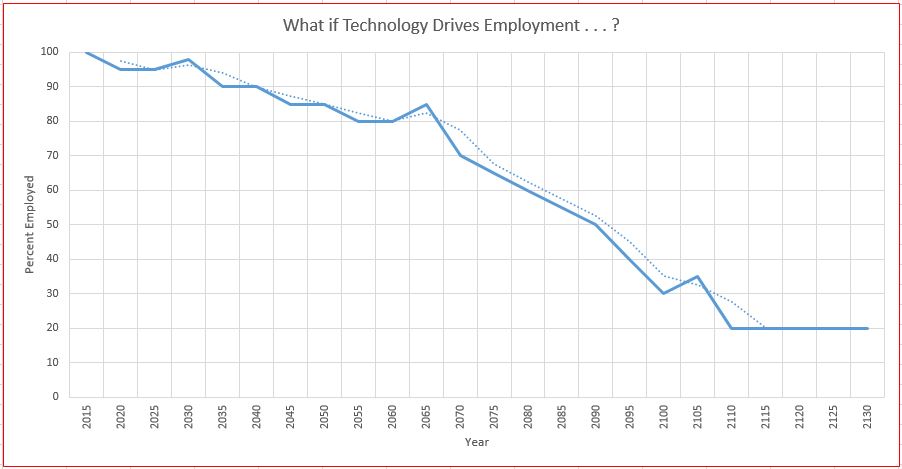 It’s like buying that new car — once you own it, you see the same model everywhere. Since I decided to start voicing my concern about where we are headed with technology and jobs, I’m finding that I’m not alone in my concerns. A friend and colleague, David Salahi, has been listening to my “diatribe” for a couple of months now.

What I was asserting is that I believe that perhaps in my lifetime, but certainly in my daughter’s and son’s lifetimes, 20 percent of the eligible workforce will be employed providing all the goods and services needed for the global economy. Their efforts will be leveraged by intelligent machines. Many of our services will be provided by intelligent machines. There will be no need to “work” as we know it. And there will likely be no opportunity to work, because to allow humans to work will only make us noncompetitive in the global market. Humans can only screw things up (ask my son whose new car was “totaled” by a drunk driver – thank goodness no serious injuries).

At first David was quite resistant to my assertions. Like the “old me,” he figured that technology would wind up creating more jobs than it destroyed. It always has in the past. But as we talked more, he began to move closer to the “new me” and started wondering if perhaps technology was moving too fast for us to keep up. More jobs are being destroyed than are being created.

As I stated in an earlier post, I found that Kevin Surace has an even more dramatic view of things than I do — he stated that humans will be “obsolete by 2064,” a mere 50 years from now. Then David sent me this post about comments Andrew McAfee made at at the Council on Foreign Relations on Monday 10/5/2014:

I am now worried that my fears are well founded and at the same time relieved that we are apparently at least starting to have a conversation around this topic. Prior to finding that I was in the company of several luminaries who are coming to the same conclusion, it was easy to dismiss myself as being alarmist. Now it’s not so easy!

Are jobs on their way toward zero? Who can be sure? Andrew McAfee suggests that he now believes that this time, dire predictions may be right. We cannot stop the march of technology so we need to focus on creating jobs if we want to keep on track with the last 200 years of incorrectly predicting the demise of the human labor force. In other words, we can and should work toward making our own predictions wrong. The question is, of course, how? The devil is in the details.

I think we will find that we use a combination of things to make ourselves wrong. We may re-define “job” to mean assignment. Many of us will be freelancers. We will also redefine how people are compensated for adding value and what that value might be. I think we will also have to face the hard question of whether or not our brand of capitalism, as we know it today, is truly sustainable over the long term. We may well find modification is necessary.

My conclusion continues to be that we need to be having this conversation at many different levels in our society. Human relation professionals — Coaches, Therapists, Ministers, Educators, etc. — should be helping people understand how to create meaning absent a traditional job. We have to make sure we understand the job creation engine in our country and fuel that engine — HINT: it isn’t big business — so that we have as many “jobs” as is practicable given superior technology.

We are cursed to live in interesting times.