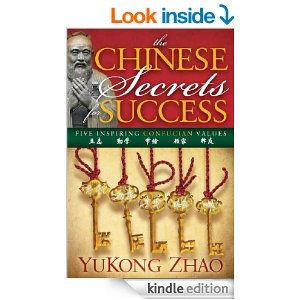 In this interesting book, YuKong Zhao shares “Five Inspiring Confucian Values” which he states are the secrets for China’s success. And in the spirit of full disclosure, I will share that during the decade of the 90’s I spend a great deal of time studying Taoism and a bit of Confucianism. When it comes to my life philosophy, Taoism resonates with me. So I am “predisposed” to take this message quite seriously. Additionally, I have learned to look to many different sources for new ideas, business models and ways of re-framing challenges. Mr. Zhao did not disappoint me. He provides much grist for the mill.

Of the many Confucian values for a peaceful and healthy society, Mr. Zhao chose these five:

It is difficult to see how these values would NOT be helpful if adopted and strengthened by US citizens. And upon reflection, these are values that we have embraced in the past. There is also ample evidence that these values have indeed served China well. What intrigues me is the concept of applying (some would say regaining) these values along side the US penchant for individualism, taking initiative and assuming reasonable risk.

China is taking the best of Capitalism and shaping it to fit within a centrally planned economy. For them, the challenge will be to not lose the Confucian values that helped them build a cohesive society while at the same time allowing the natural tendency toward free markets to blossom when left alone. In a visit to China some years ago, my observation was that indeed, capitalism was alive and well in the small local markets. It could not have been missed by Chinese officials, so one can only conclude that the government was allowing the experiment to continue.

The task of rebuilding our sense of the greater good and personal restraint will be much more difficult than we think. Our nation seems divided along socioeconomic lines. It feels as though the struggle may well be between the rugged individualism we have been used to, replete with “super heroes” (the top 1%), and the need for team players to propel us into successful competition in the global economy. If one believes that we will need to pull together as a country in order to play in the global game, then Mr. Zhao’s advice to consider these Confucian values is well taken.

It remains to be seen if the US is mature enough to admit that we don’t necessarily have all the answers and that we aren’t necessarily at the top of our game anymore. Will we be able to learn from other countries? Can we take the best practices and apply them to our own culture? I believe we have no choice in the matter if we are to be among the global leaders in the future. The Chinese Secrets for Success is a good start to at least getting us thinking in a productive way.