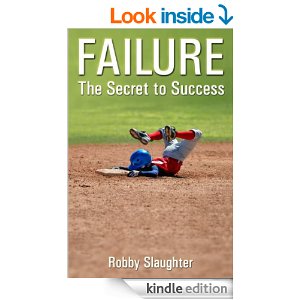 The topic of failing as a path to success is not new. It is almost cliche these days that we “need to fail forward faster.” And Robby Slaughter has done a fine job of building a compendium of both famous and not so well known examples of how failure and persistence has led to success in the end. He rightfully points out that, in many cases, the lessons learned along the way were instrumental in formulating the final success. What I like most about Slaughter’s view of failure is that it lends credence to the building of organizational cultures in which it is safe for people to think and try new things. We need as many people thinking as possible and a lot fewer sitting around waiting for instructions and fearful of failing in any way.

My cautionary note is that not enough attention was paid to the not-so-subtle point that businesses are not (and should not) be built with the intent to fail. Failure is an option to be considered. We can learn from them. However, I disagree with Slaughter that we should make failure a goal. Additionally, while it is fine to pull examples of where failure, properly framed and understood, leads to great things eventually, there is no attention paid to the myriad cases where failure was indeed simply failure and the enterprise ended. We all know the statistics for start-up company survival – they are abysmal. It is doubtful that the majority of those failures went on to build great companies or even small life-style companies.

So, if one reads Slaughter’s book with the understanding that it is all about making sure we view failure as an option, a possible outcome of a serious attempt at success, then the time reading will be well spent!