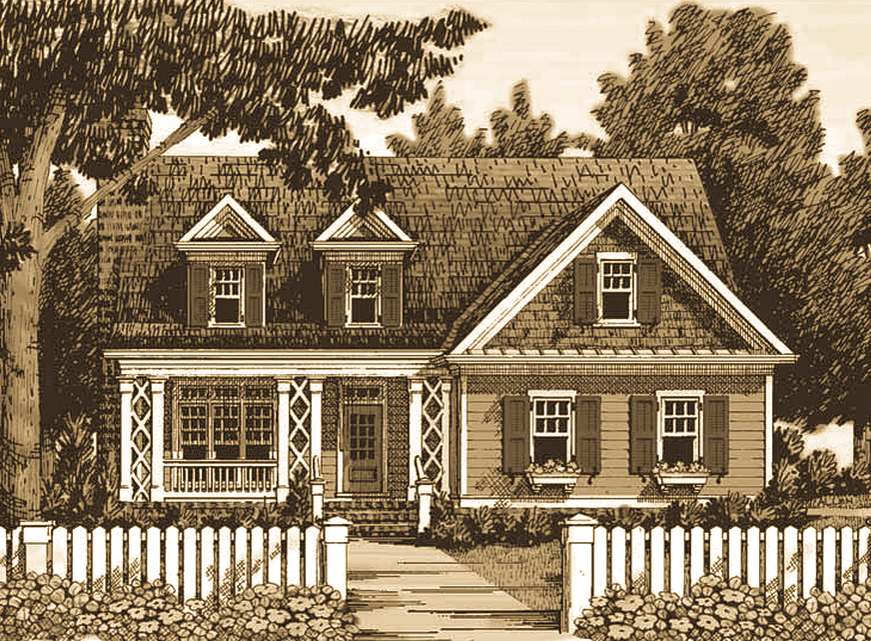 Like so many folks our age, my wife and I purchased a “starter” home a year or so after I was established in my profession. At the time, that profession was electronics engineering. The home was a very well built New England home, but small and old. It was a Cape Cod style home. It needed work, lots of work. The representative artist’s conception to the left is way too flattering! But, it was our first “real home” and so we didn’t mind.

One of the many projects we undertook (I won’t bore you with the items on the “honey-do list”) was to re-wire the whole house. The existing wiring was old and not very safe. Back then, things were mostly buyer-beware with very little of the home inspection zeal we have today before ownership changes. So we bought “as is” and just planned to do what was necessary to be safe and comfortable. What got me thinking about this is that we recently had a much smaller but similar project in the brand-new home we bought about nine years ago.

Back to our first home. I set about planning for the big re-wiring project. First, I would need to make sure we could get the utility company to increase the service coming to the house. Second, I’d have to completely replace the distribution box (breaker box) since what was there was an antiquated fuse box (and yes, some of the fuses I found had pennies behind them because the fuse had blown – big time scary).

For whatever reason (youthful exuberance?) I decided that I would put in a 200 amp service box and that every room would have at least two circuits – 20 amp circuit for the outlets and 15 amp service for the lighting. To this day, bedrooms do not generally have 20 amp circuits and most houses have only 100 amp capacity breaker box. I made sure we had two separate circuits in the kitchen (not counting the 240 volt circuit for the stove). I was determined that no breaker would trip just from normal use. It was a long and difficult job to snake wires from the basement up to the first and second floors. Tedious nights and weekends mounted up, but we did it.

Of course, the time came when I had to have my work inspected. After all the effort of pulling wires, getting the utility company to increase the service to my home (they would only go to 100 amp service since they didn’t want to replace a transformer and outside wiring just for me) and studying all the appropriate codes, I was ready for the inspection. A wonderful and patient “older” inspector came in and started his work. He went to the breaker box and asked me to remove the cover. He looked at all the carefully labeled circuit breakers then looked at me – quizzically, eyebrows raised. Then he asked me to open one of the junction boxes where I had branched a couple of circuits. He nodded approvingly as the wire-nut was removed and the wires stayed tightly twisted together. He explained why that was important. We then inspected a couple of outlet boxes in various rooms.

When he was done. He quietly asked me a question, “You’re an engineer, right?” I said (a bit proudly I’m afraid), “Yes, I am.” He said, “It’s obvious. No contractor in his right mind would wire a house this way. It is far too expensive and not at all necessary. However, the work you have done is excellent and it meets the code. So you’re good to go.” And he handed me the signed paperwork for my insurance company.

As the contractor shook hands and left, I swear I could hear my father’s voice chiding me, even though he was no where around; “More college, more dumb.” Today, I look back on this story and realize that one of the leadership lessons to be learned is that the folks on the front line are more likely than not to have practical and simple answers to our challenges. If I had taken the time to find a few electrical contractors or perhaps other engineers who had done some of this work, I might have been much more practical in my approach. Instead, pride (and upbringing) kept me from doing anything other than, well, re-inventing the wheel, doing it mostly by myself and doing an over-the-top job.

Another lesson is that despite all the critiquing, I was very proud of the work I had done. The house was safe. We never had any light dim when an appliance turned on. I never had a problem working in a bedroom because the outlets were separate from the lighting circuit. So even though I had solved a problem in a manner different than he would have, the gentleman who inspected my home still complimented me on my work and approved the installation. As Daniel Pink pointed out — Mastery, Autonomy and Purpose. To be frank, I think I might do the exact same thing today if I had to rewire this very modern home we live in now. Come to think of it, I did exactly that on a smaller scale- only I had a contractor do it this time. A bedroom that we converted into an office had way too many computers and a current-sucking color laser printer in it to run on a measly 15 amp circuit. There are now separate circuits in this office!

Leaders today are leading knowledge workers. Often, the workers know more than their leaders when it comes to the details of their responsibilities. That’s as it should be and it will get to be even more that way as we move forward. So we must push the authority and decision making out as far as we can to where the information is – at the front line. Clear vision and values are critical.

If, today I was to design the home we’re in, I would have been able to tell the contractor that one of the “bedrooms” needed to be an office with a fair amount of equipment. The wiring would have been properly done. Instead, homes are ASSUMED to have bedrooms used as bedrooms. What assumptions are we making that have to be true for us to be successful? Are we listening to our customers and our front-line employees about what’s needed and what’s changing? Are we taking full advantage of our knowledge workers to change our business models and processes? Great companies are, and it gives them a competitive advantage.