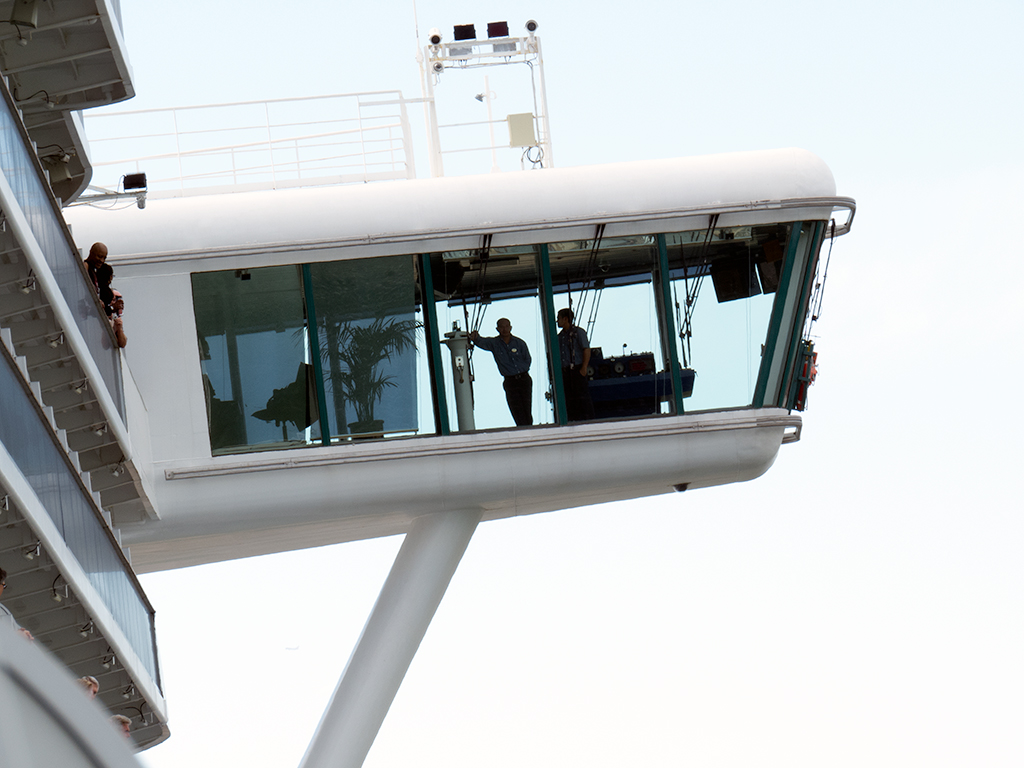 Its interesting what happens when I have some “downtime.” On our vacation, I had lots of downtime (meaning off the grid) on purpose. So many thoughts went through my head about a whole slew of unrelated topics. One, somewhat related to our vacation, occurred to me as I was lounging on the balcony waiting to depart the Port of LA. I had the thought, “why are all those people up on the bridge of this ship?” (The picture is of the crew as we waited for departure.) Most of our airplanes pretty much fly themselves, Google is running around with cars that drive themselves, so why is this ship not navigating itself? To be sure, the bridge on modern ships is nothing like “the old days.” There is a lot of automation already with lots of computer screens, joy sticks, etc.

Well, I’m back in the so-called “real” world now. So lots of those thoughts went the way of all perishable items. However, today on my run, I was listening to the Economist audio edition for the week of 3/8 through 3/14/2014 (I told you, off the grid, so I’m behind on lots of stuff!). This edition includes the Technology Quarterly and in it was an article on Marine Technology – Ghost Ships, and yes, it’s what you’d guess, it’s an in depth article on how folks are seriously looking at how to run the ship from a shore-based control room. Synchronicity! The general consensus is that compared to other automation projects (like cars and planes) automating the ship navigation should be easy. They are even thinking about how to monitor the equipment (huge diesel engines for example) remotely. Should there be an issue, the ship can shut down the engines, drop the anchor and wait for rescue. This could also put a big hole in the piracy business – no crew, no ransom and you can’t control the ship from the bridge if it’s locked out by the land control room. Hold on, Mr. Pirate while we sail you to the nearest brig! On the other hand, perhaps a new industry for hackers taking over control of the ship and stealing the cargo. Interesting.

Of course, we’re only talking about cargo ships at the moment, but why not the passenger ships? The maritime part of the operation is ripe for automation. The passenger services (hotel and restaurant operations) will still be in need of the human touch. We were waited on “hand and foot” on this vacation. It was really a wonderful experience. Except for the Captain’s reception and watching a few maintenance operations, the only folks we interacted with were the passenger service side. The marine operation was mostly invisible to us until we needed to take a tender ashore.

I view this kind of automation or disruptive technology as not that far-fetched because we have already seen it advance in other areas of transportation. But what about your business? What about your employees? Are you keeping up with the technological advances that might significantly change your industry? And just as importantly, are you creating “downtime” for yourself so you can ponder the “what-ifs?”