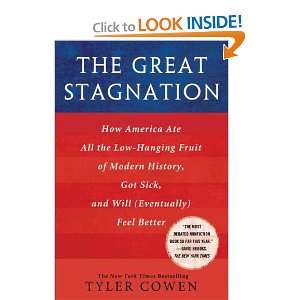 According to Tyler Cowen, Land, Technology and Uneducated Kids provided the America of early days an incredible diet of “low hanging fruit.” In this excellent short book (fewer than 90 pages), Mr. Cowen shows how the manifestation of having eaten all the low-hanging fruit is that individual and family median incomes have all but stagnated with respect to the pace of growth in GDP per capita. He points out that the last decade has seen a decrease in median family income of about 3%.

Cowen further worries about the sporadic nature of productivity improvements. And he is concerned about the misleading data we look at with respect to GDP and living standards. He has this to say about productivity:

The larger the role of government in the economy, the more the published figures for GDP growth are overstating improvements in our living standard.

And on the role of the government in terms of consumption, Cowen points out that:

The larger the percentage of government consumption in the economy, the harder it is to tell exactly how well we are doing in real economic growth and living              standards.

In the last chapter Cowan asks, “Can We Fix Things?” The good news is put on a global basis, as I believe it should be. Cowen states that “The good news is this: A lot of what we ought to be doing, we have in fact been doing. The first favorable trend is the interest in science and engineering in India and China.” A second hopeful trend is that the internet is showing an interest in generating more revenue. It hasn’t always done so. A third positive trend is America’s electorate is showing a deep interest in “fixing” the K-12 education system.

Cowan calls for, and I support, the concept of raising the social status of scientists. He strikes a hopeful note; “Yet reason and science have never been more important: If nothing else, a more reasonable and more scientific understanding of our predicament can help us cope, both intellectually and emotionally. Back to the hard problems.” That sets the stage for his next book, Average is Over.

See this book on Amazon.