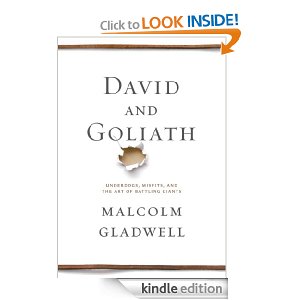 As always, Malcolm Gladwell gave us a new twist on a very old story and shakes our image of how the world is. Many readers of this blog will almost immediately understand the reference to that Jewish Old Testament story of David and Goliath (1 Samuel 17 if you want to investigate). Perhaps most have read that story with the understanding that the message is one of hope and faith that a miracle can happen; that an underdog can overcome all odds and be victorious.

Gladwell disabuses us of that notion. In a quirky weaving of new scientific data, highly refined informed guesses, ancient myth and modern hypothesis Gladwell leads us to understand that no miracle really happened. David wasn’t an underdog. Goliath was. David should have won this battle. He had superior weaponry. As it turns out, a sling with a smooth round stone from the wadi (valley) is far more lethal, and lethal at a great distance, compared to a sword, spear and javelin wielded by the slow Philistine Goliath. Here’s what Gladwell had to say:

Twice David mentions Goliath’s sword and spear, as if to emphasize how profoundly different his intentions are. Then he reaches into his shepherd’s bag for a stone, and at that point no one watching from the ridges on either side of the valley would have considered David’s victory improbable. David was a slinger, and slingers beat infantry, hands down. “Goliath had as much chance against David,” the historian Robert Dohrenwend writes, “as any Bronze Age warrior with a sword would have had against an [opponent] armed with a .45 automatic pistol.”

So you see what we thought, what we assumed to be true and what we were likely taught, was in fact not accurate. Gladwell goes on to relate many other stories with much the same lesson – The Advantages of Disadvantages. How many times are we cowed by our circumstances. We think we are disadvantaged and we in fact may very well be so. The question is:  Do we look for the advantage in our disadvantage or do we give up? From Vivek Ranadivé, to Lawrence of Arabia (T. E. Lawrence) Gladwell shows us how individuals turned an obvious disadvantage to their advantage against all odds.

A common theme in these success stories is that the “hero” simply played by different rules. David said in effect, “I’m not going to stand toe-to-toe with some huge Philistine, I’m going to rock his world (apologies, I couldn’t resist) without getting within spear distance and certainly not close to that sword. Ranadivé said he would coach his daughter’s basketball team in an unconventional and entirely “legal” way despite the “norms” of the game he would give them all a chance to play their game. T. E. Lawrence could win because he was “the furthest thing from a proper British Army officer.

Gladwell uses these and other lessons to teach us about the “Inverted U curve.” That is a graphical representation that depicts the old adage that just because some is good doesn’t mean that more is better. We reach a point where student class size, for example, can be too small for proper learning. I know you will likely object, but yes, there is a point where too much money is a problem – especially as a parent. Our children can be spoiled and their own lives made less meaningful by having too much wealth.

Here’s another myth busted. Go to the best University you can get into. Nope. Not necessarily true. In fact, perhaps downright Wrong! As it turns out, being the big fish in a little pond is best for the vast majority of people. Sure, if you graduate at the top of the class at Harvard you will likely do well. Guess what. If you wind up graduating in the middle or bottom half, it is very likely you would have done better going to a second choice school and graduating in the upper part of that school. Savvy employers select the cream of the crop at Harvard and then the cream of the crop at the secondary level Universities rather than the middle of the class at Harvard (just using Harvard as an example, not picking on them at all!)

I could go on, Gladwell tackles Dyslexia, loss of parents at a young age, and much more. I think though, the best thing is for you to read this excellent book yourself and absorb the many important “life lessons” that Gladwell brings to us.

See this book on Amazon.