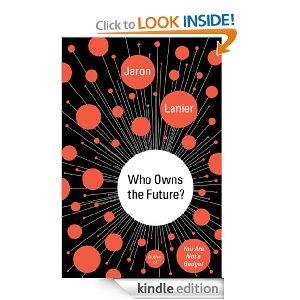 For the past several years, it seems as though I rarely have any discussion with business executives or consumers that sooner or later doesn’t turn to the topic of change and how technology is driving that change. In the longer and more focused conversations, we often wind up sharing views about where things are headed. Usually, we end up being either a bit giddy with exciting possibilities or totally bummed out over the impossibility of keeping up. And then came Jaron Lanier’s 2013 book Who Owns the Future?

The question is intriguing to me. Who will own the future? Lanier makes a solid case that we are at a point to change the trajectory of ownership from information moguls, in the form of “Siren Servers,” to a vast middle class. His argument, solid though it may be, is not always easy to follow. I found this book made me think deeply about topics and concepts to which I had previously only given light treatment.

In a nutshell, and overly simplified, here is the premise: Anyone and everyone connected to and actively using the web is providing data to the myriad companies they touch electronically. That data is being collected, stored, aggregated and used to sell you back the targeted ads so coveted by the companies selling products and services. We have the computing horse power to track the original source of the information, but we do not. If we did, we could make sure “micro or nano-payments” are made to every individual whose information is used by people all the way up the food chain. Such a system of payment for data would create a more equitable distribution of income from the massive amount of data we’re collecting and by doing so, create a vast middle income class that would in turn provide real customer opportunities for companies.

“The information economy that we are currently building doesn’t really embrace capitalism, but rather a new form of feudalism.” – Jaron Lanier

At this point, we are willingly giving up our data without compensation because we are enticed by the “free” use of applications, websites and cloud computing. If we continue on this path, technology of all kinds will continue to destroy more jobs than it creates thus hollowing out an already diminishing middle class. The system is obviously not sustainable. To quote the author; “The cloud is driven by statistics, and even in the worst individual cases of personal ignorance, dullness, idleness, or irrelevance, every person is constantly feeding data into the cloud these days. The value of such information could be treated as genuine, but it is not. Instead, the blindness of our standards of accounting to all that value is gradually breaking capitalism.”

Lanier reminds us that we all know, or at least should know, that there is no pure form of capitalism, and we have never really experienced anything other than a regulated capitalism. Therefore, we should not be afraid to “tweak” our system to be sure that we do not allow the continued demise of the middle class or our whole system will fail.

Lanier’s is an important book with a timely and serious message. Technologists and business leaders would do well to read this call to change the direction in which we now find ourselves heading. Technology can be seen as creating this challenge as well as being able to mitigate the negative effects. To do so, we must see that we are creating an unsustainable model and make the necessary corrections, difficult as that may be.

See this book on Amazon

See my Kindle Highlights from this book.