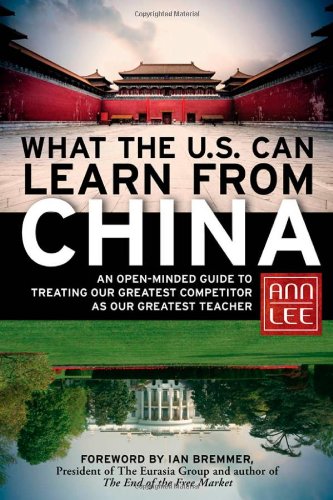 I had the pleasure of seeing Professor Lee at a recent Harvard Business School Alumni presentation where she was the guest speaker. Her discussion left no doubt about her commitment and passion when it comes to bringing the United States and China closer together. She knows both countries quite well and acknowledges the good, the bad, and the ugly in both countries.

As the title explains, her book is focused on what the U.S. can learn from China. She states that it is “An open-minded guide to treating our greatest competitor as our greatest teacher.” She sees a big gap in our willingness to learn from China and much of it comes from old stereotypes mixed in with current “propaganda” and fear. Based on my own experiences with the hubris of many U.S. leaders and political activists, I am inclined to agree with her. Here is a review of my thoughts about this excellent book.

Senator Carl Shurz (1829-1906) made the following remark to the Senate on Febrary 29, 1872: “The Senator from Wisconsin cannot frighten me by exclaiming, ‘My country, right or wrong.’ In one sense I say so too. My country; and my country is the great American Republic. My country, right or wrong; if right, to be kept right; and if wrong, to be set right.” It seems to me that the adoption of this sentiment would well serve both our congressional leaders and our citizens.

I do not see Prof. Lee’s presentation or discussion to be so much a judgment about “right and wrong.” I do see our country’s collective tendency to have a conviction that we cannot possibly learn how to improve our form of democracy, political structures or national investments from a communist country. On a smaller scale, I run into this attitude frequently around businesses. Many leaders believe that there is little to learn from companies outside their industries. Yet time and time again, the exact opposite is shown to be true. Businesses most often make quantum leaps in performance when they adapt a new way of thinking from outside their own industries. Frequently, industry conferences, consortia and user groups wind up in unproductive “group think.” Perhaps the U.S. can avoid the same pitfall by openly looking for lessons to learn from other countries – regardless of their forms of government.

Even if you approach Prof. Lee’s book with an open mind, it is difficult to take the constructive criticism of our institutions. I found myself thinking, “Yes, but . . .” many times. In retrospect, I realize I was being defensive. I also found myself thinking, “boy this is really pretty one-sided,” but that was also because I had a hard time hearing the message – which is that China has willingly learned about and from the U.S. but the U.S. has done very little to learn about China or learn from China. Why is that? Do we really think that a 237 year old democracy can learn nothing from a culture that is thousands of years old? If we are to set our country right, we will have to do better. We will have to be willing to bring best practices to our institutions regardless of the source.

This book lays out some tough lessons that are difficult to take, but the writing is clear, concise and generally well documented; as you would expect from an academic. Many of the observations she makes about China’s system match with what I observed in my brief visit there three years ago. In May of 2010 I had the great fortune of visiting China with a native. Our business allowed us to meet with leaders of companies and government. And in addition, we visited the poorer outlying villages, not just the larger advanced cities. I believe I was able to see more of the “real” China than many visitors might see. What I noticed was an incredible capitalistic people with some obvious wealth and some very obvious poverty. Yet, in general, the people were happy. I, like Professor Lee, believe we could learn much from China’s recent growth and experiences. Instead of viewing China as only a competitor and “lesser” communist country, we would do well to acknowledge the phenomenal job they have done in raising so many of their people out of poverty while maintaining a stable economic system. They learned by watching Russia that to move too quickly is a mistake. They learned by watching a relatively unregulated capitalist economy in the U.S. that controls are required. They are taking the best practices from countries around the world, modifying them and applying them to their own brand of capitalism, communism and economic stability.

As Professor Lee points out, China is at a significant crossroad at this point. It remains to be seen how well they will do in keeping their transition moving forward without losing economic stability. They have a long way to go to bring more of their citizens out of poverty. It would be a mistake to believe they will not be successful. Meanwhile, we have much to learn from their hard work so far. It would behoove us to acknowledge that fact not only in the halls of Congress, but on “Main Street” as well. Reading this book with an open mind is a good way to start.