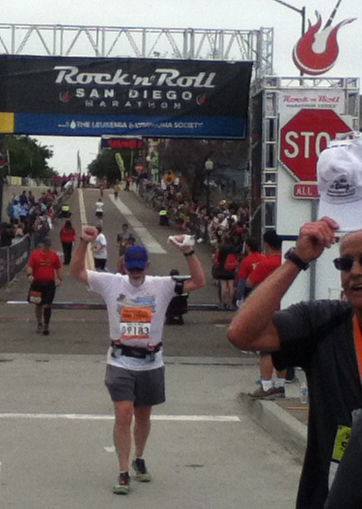 Rich, a good friend, colleague and accountability partner who lives in Florida, shares with me a love of running. We speak almost every weekend to find out how we are progressing in our personal and business goals and to hold each other accountable for the commitments we make. Often we will chat about our trials and tribulations when it comes to the challenge of maintaining our schedules so that we can run or the challenge of dealing with injuries and the like. One weekend late last year, he casually said, “we should run a marathon.” My comment was quick and to the point, “The one thing that is NOT on my bucket list is running a marathon. Thank you very much.” In his own quiet way, he just planted the seed. Then, several weekends later in one of our conversations, Rich let me know that he had found the perfect race for us – the Rock ‘n Roll marathon in San Diego on June 2, 2013. He also let me know that he would be willing to fly out from FL and run with me. “Just think about it,” he said, “we can decide later there’s plenty of time.” Trapped.

Really, how could I say no when the man was willing to fly all the way across the country to join in on a fund raising marathon with me. So the next time we spoke, I went on and on about how he is at least thirteen years younger than I am, that these old bones have been running for more than 30 years now and they are tired, and I’m too busy to train, and I haven’t had a physical in way too many years, and . . . OK, I’ll do it but only if my doctor does a stress test and says I’m “good to go.” And only if we can change our minds on race day and do a half instead of a full. All of this Rich agreed to with no hesitation. Double trapped.

Stress test was fine. Doctor said “go for it.” DAMN! No way out.

We made the commitment and signed up. Rich secured his plane tickets. I made hotel reservations in San Diego. Together we figured out that it would be best to take the train from the Irvine Station down to San Diego so, when totally crippled after the race, some nice San Diegan could throw us in the baggage car for the ride home. Hopefully, someone else would remember to roll us out again at Irvine. The only thing left was to train for the race. What a drag that turned out to be!

At first, things were fine. I enjoyed the ramp up. I found a training plan that came in three flavors – beginner, intermediate and advanced (the last being those crazy folk who run these things all the time.) I didn’t even consider advanced but I didn’t want to be a beginner either. After all, as I said earlier, I’ve been running (okay, jogging) for more than 30 years. Yep, I chose intermediate which meant that I had a 4 month plan which worked me up to two 20 mile runs, two weekends apart. The schedule was consistent – Monday cross training, Tuesday, Wednesday and Thursday intermediate miles building up to the long miles, Friday is a rest day, Saturday a pretty long run and Sunday a huge run! It wasn’t long into the schedule when I realized I didn’t have a life. Needless to say, what was once enjoyable was now becoming a chore. Things are pretty bad when you can get through almost half of the audio version of the Economist magazine on your weekend runs. For those who don’t use the audio version of the Economist, it is about 14 hours of mp3 audio – word for word, the whole magazine. I download it every week and listen to sections of it on and off all week long.

And then, the nice folks at the R ‘n R committee sent the “new course map.” It came with an elevation chart. Now I know San Diego a bit. We’ve been there many times in the 22 years we’ve lived in Orange County. It’s one of my favorite cities. Just looking at the map made me tired. But the good news was in the elevation. Only about 200 feet! My training routes regularly took me up over 600 feet. WooHoo and Rich lives in FL where anything above 50 ft is considered a mountain. My smug euphoria was short lived. One of my young clients – less than half my age – told how he had just run the Orange County marathon. It was gruesome. To hear him tell it, he was just about crawling at the end. Limp, walk, jog ten feet, limp walk, etc. Only at the end, when he saw his family did he gather the strength to overcome the pain and jog the last 100 yards or so. I really needed to hear that! My bride will be singing in a concert during the race, my daughter is in Boston and my son is in Chicago. Maybe, I thought, when Rich finishes first he’ll make sure to cheer me in. (Which of course he did and secured the picture above.)

Well April 28th I was supposed to run the first 20 miles, but I was in an airplane coming home from a family vacation. So, the following week, May 5th, I went out for the first 20 mile run. This was definitely NOT a pretty sight. Loaded up with Gu and water I set out on the grand adventure. Along about 12 miles I more or less “hit the wall.” There was lots of walking and complaining (to myself since nobody else is foolish enough to be doing this) and cursing of a certain young whippersnapper. But, I made it through the whole 20 miles and even though at a snail’s pace (12:28 min/mile,) I did manage it – 600 foot rise and all. And I didn’t feel nearly as bad as I thought I would. So the following week I figured I’d get back on schedule by running the second 20 miles – who needs two weeks between big runs? Obviously, the first 20 miler did in fact damage my brain – I am now certified crazy.

Do you know how hard it is for a man to ask directions? Well, imagine how hard it is to call your wife and say, meekly, “Hi dear, what are you doing at the moment? Can you come and pick me up? I’m in the gutter at the top of the big hill about 14 miles from home.” Trust me, I didn’t want to have to do that. She was kind and came with water (a towel to keep the car seats somewhat dry), and assurances that doing 14 miles up that hill after doing 20 the weekend before was really very impressive for an old man. Bruised male egos don’t hear those things very well.

But, I took it in stride (all puns intended) and stayed on the ramp down period that ostensibly keeps you limber and in shape without tiring you out as we came up to race day. All I was focused on was getting this thing over so I could get my life back. I had a primary goal and a secondary goal. The primary goal was to complete the marathon without injury and feeling as though I was in reasonable good health. The secondary goal was to finish in about 5 hours and 3o minutes because that was our estimate when we filled out the enrollment form. A pure guess, but there it was, out there, estimate 5:30:00 – which put is in the next to last corral for the start.

I’ll spare you the gory details. Rich stuck with me the whole way except that 4 miles from the finish I suggested (strongly) that he needed to “take off” and try to make the finish in under 5:30. So, reluctantly, he did that and he finished in 5:29:21. Awesome! I came in a bit later at 5:45:35. Not so bad for my first ever marathon and not so far off my arbitrary time goal. To put this all in perspective, the winner finished in 2:15:00! I can’t imagine running at a an average 5 minute 9 second pace for even 1 mile, let alone 26.2 miles.

I enjoyed the race very much. It was a lot of fun and while tiring, it was definitely a good day for the race. I was a bit sore for a few days, but I’ve experienced much worse when I’ve over  trained or simply just ran too far after taking several weeks off. So I’m a happy camper at this point. However, because of the time it takes to train for the marathon, I doubt I will be doing this again. I’ll stick to running to be healthy and if I race at all it will be in the shorter categories, 5K, 10K or 1/2 Marathons will do just fine for me in the future.