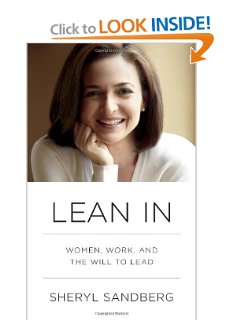 Presently, I have no women in my CEO group. In the past we’ve enjoyed the presence of two strong women entrepreneurs. The group agrees that for sure we had a wider view of approaches to challenges and opportunities. And that was not simply because we had different business experience at the table when these powerful women were there, it was because we had a diversity of gender views. We continue to search for that gender diversity for our group.

So I picked up Sandberg’s new book on women leaders with anticipation. I wanted to understand why there was reluctance on the part of so many women entrepreneurs to join this high performing group. Part of it is just numbers. A 2012 McKinsey survey of more than four thousand employees of leading companies found that 36 percent of the men wanted to reach the C-suite, compared to only 18 percent of the women. And of course there are the “usual” reasons — too busy, I already belong to an industry group, I travel and can’t make monthly meetings, etc.

Alice Walker may have the real issue pegged though. She observed that “The most common way people give up their power is by thinking they don’t have any.” Many of the women entrepreneurs with whom I’ve spoken seem to want to hide the power they wield or, as Walker suggested, aren’t not aware of the power they have accreted. They may not be able to see themselves sitting at the table with other CEOs, Business Owners and/or General Managers from different industries.

There are many insights in Sandberg’s book. As a result of having read her research, thoughts and opinions I have changed the way I now approach women entrepreneurs. Instead of assuming, on the one hand, that women CEOs have exactly the same approach to power, leadership and relationships as her male counterpart, I try to make sure I’m even more aware than usual to not have any preconceived notions about CEO motivations for being interested in leadership. On the other hand, I work even harder to not allow the women to “give away their power” by not recognizing that they have that power. That is very different than how I might approach a male leader where I am more likely to run into an “outsized ego.”

I now realize that I will have to work even harder as I coach women in leadership positions. Thanks to Sheryl Sandberg, I at least now “have a clue” about how to shape my own thinking and guard against my own prejudices. Anyone in a leadership position, man or woman, will find Lean In to be a must read and well worth the time. After all, the essence of being a leader is developing other leaders, so let’s not make the mistake of allowing half of the population to escape our attention and mentoring.