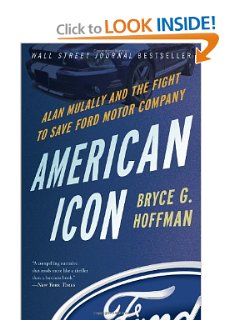 I am not a car enthusiast. I enjoy having a reliable, clean and efficient vehicle, but the primary purpose, for me, is to get me where I’m going on time and without surprises. So when I ordered this book, my expectations were that I’d ignore the “car stuff” for the most part, and concentrate on the leadership stuff. Well,I wound up concentrating on both, and enthusiastically at that. Hoffman has written an excellent book mixing family business intrigue with a history of the car business and its missteps as well as a book replete with leadership lessons. Here are just a few of the most notable for me.

Look outside the industry: Many leaders today realize that to avoid “group think” or “boxed in thinking,” it is useful to have cross industry experience. To his credit, Bill Ford, Jr., recognized that not only was he not the best person to turn Ford around, but that he had to go outside the Detroit mentality to get the job done right. After several failed prospects, they finally “landed” Alan Mulally of Boeing fame. History shows that no finer pick could have been made. Have a clear compelling strategy and/or vision: One Ford became Mulally’s battle cry, and it was, essentially, the business plan. While he had that simple, clear plan, he also had four simple points on which he kept his team, the board and the company focused;

Accountability: Almost immediately upon assuming his responsibilities as Ford’s new CEO, Mulally instituted weekly Business Plan Review (BPR) meetings. He further insisted that his direct report team (all senior “c-suite” executives of major divisions) make their presentations themselves. It became crystal clear very quickly that they were to be in command of the numbers and be accountable for knowing what was going on in their divisions. Any “issues” that came up in this BPR would be noted and any working solution was ironed out in the follow up “special attention review” or SAR immediately following the BPR.

“Rules” of engagement: Every executive meeting had the following list of rules to be followed;

The data will set you free: Mulally insisted that decisions and continuous improvement be based on data. Up until then, decisions were often based solely on instinct. Conventional wisdom (Detroit think) was used to decide what did and did not get designed, delivered or developed. Mulally would only accept vetted numbers and his team was expected to know them and were held accountable by the numbers.

Study the competition: Early in his first months at Ford, Mulally showed up at GM and Chrysler. He was content to let the “senior Detroit executive” treat him as the naïve aerospace engineer who would undoubtedly fail since he wasn’t a “car man.” What he learned was that those executives didn’t have a clue about how bad things were for their companies. He went back to Ford with a renewed sense of urgency to get his team to see the reality of their situation.

There are many more lessons in this well written and compelling story. Hoffman has given us a must read leadership book.