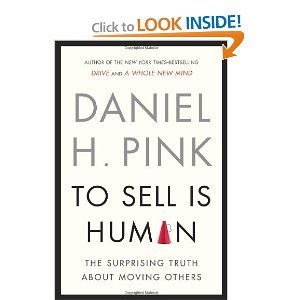 The surprising truth about moving others. There are many volumes written about sales. There are myriad training courses on sales and how to be efficient, effective and at the top of the heap at the game of sales. This book is not like any of the ones I have read prior to this; nor is Pink espousing any of the usual hype about overcoming objections, how to close and/or how to manipulate folks into buying your product or services.

Instead, Pink is proposing something that I have been struggling with for the past five years and suggesting to anyone who would listen: traditional sales isn’t any longer anyone’s job. It’s everyone’s job because sales has fundamentally changed. Pink states that “Most of what we think we understand about selling is constructed atop a foundation of assumptions that has crumbled.” He further states that sales has changed more in the past 10 years than it had in the previous 100 years.

Pink replaces the old standard ABC rule in sales; “Always Be Closing” with a new ABCs— Attunement, Buoyancy, and Clarity. He proceeds to explain what he means by each in the following chapters of the book. Briefly, attunement is bringing oneself into harmony with individuals, groups and contexts. Buoyancy is the quality that combines grittiness of spirit and the sunniness of outlook. It’s what allows salespeople to overcome the “ocean of rejection” they face every day and still function. Clarity is the capacity to make sense of complex situations, that gray area we all try to avoid. Salespeople become problem finders rather than problem solvers.

To Sell is Human is broken into three parts: Part 1 is Rebirth of a Salesman, Part 2 is How to Be, and Part 3 is What to Do. He develops a new category he introduces as “non-sales selling” where we (all of us not in the traditional sales position) are “persuading, convincing, and influencing others to give up something they’ve got in exchange for what we’ve got.” One of the more important changes that Pink underscores is that the salesperson is no longer needed as a curator of information. Comnumers are able, if they so choose, to be as well informed about the products and services as the salesperson. He coins the phrase caveat venditor – seller beware.

At the end of each chapter in parts 2 and 3 are dozens of techniques assembled from fresh research and best practices around the world. Pink maintains that the ability to move others to exchange what they have for what we have is a crucial ability that is required for our survival and wellbeing. The capacity to “sell” isn’t some unnatural adaptation to the merciless world of commerce. It is a part of who we are.

On a personal note, I found this book to be both refreshing and humorous. Refreshing because Pink gave me a way to think about and express what I have been seeing and talking about for a long time now. Specifically that sell is a four-letter-word. More and more people are turned off by traditional sales (even the so-called “consultative selling” is now seen as manipulative.) And I found the book humorous because I found that I was laughing at myself. Pink introduces us to Norman Hall. Hall is shadowed as he goes through his usual (and traditional in many ways) sales job in San Francisco. Hall is the very last Fuller Brush Salesman. Why that made me laugh is because I am old enough that I brush my hair almost every morning with a Fuller Brush that my mother gave to me one Christmas when I was a young teenager. I have been using it ever since. I remember the Fuller Brush man (and yes, they were all men as far as I know) ringing our doorbell and bringing new products into the house for my parents to purchase. By the way, what product do you still use that was purchased more than 50 years ago?

Since I spent many years as a professional salesperson, the passing of the traditional sales model is, for me, more disturbing than the passing of our usual business models or the accelerating obsolescence of products. There is no going back though, and those who work in the sales function would do well to read Pink’s view on how things have changed. For those of us not in a direct sales function would do well to understand that fundamentally we are all selling in one way or another. Indeed, to sell is human.