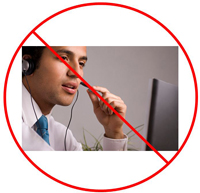 I don’t know about you, but these days, when the phone rings and I don’t recognize the number, or if it is caller ID blocked, I don’t answer. That’s if I’m even aware of the call in the first place. Much of the day, my phone, thanks to a nifty Android app, is in silent mode. Whenever the app notices I’m in a meeting (that would be a calendar entry with more than one person in the entry), it automatically puts my phone on silent. I LOVE THAT APP!! And judging by how often I get a voice mail the few times I do use the phone to call someone, I think that the App (or a manual version of same) is at work for them too. Who picks up the phone these days? Who wants the interruption? Unless you’re waiting for a date, who is actually happy when the phone rings?

I’ve been told that the young folks among us do not simply pick up the phone and call. They consider it rude. Instead, they communicate through Facebook, SMS Message or other social media. If they feel the need to speak with you, they will, I’m told, send you a text message or IM asking when the best time to call might be. Now that’s being considerate. At this point, the technology isn’t there to let you know if I’m busy, engaged, tired and taking a nap, trying to concentrate on something or in the middle of something far more intimate (hey! with my wife – it’s legal!).

I’m with the young folks on this one. I have more than 2200 contacts in my phone list. Many have multiple phone numbers. Chances are really good that if I’ve met you, I have your number and your name will show up if/when you call. Rarely, I will get a call from a number I don’t recognize, send it to voice mail, and that person will leave a message. I of course call them back. I’d say at least 9 times out of 10, there is no voice message when I do that. If you really wanted me and didn’t bother to leave a voice mail, shame on you. Obviously, I won’t be getting back to you.

Here’s where I’m still a bit old fashioned. I won’t be contacting you through Facebook. Well, maybe if you’re family I will. However, I might very well contact you through LinkedIn if you’re in my professional network. But I find that not everyone checks LinkedIn as often as I and others might. So I still rely on good, old fashioned e-mail to get in touch with you. I like that much better. It’s not an interruption unless you let it be one. You can respond when you want to, perhaps after thinking a bit about the communication. You can signal me if you aren’t going to respond soon – such as out of the office automated replies. You can attach files to your answer or question. You can even reply with, “I think we need to have a conversation about this. What’s a good time to call you?” I like e-mail and LinkedIn. I even like text messaging my close friends who are okay with text messages (some folks have to pay too much and they don’t want text messages.)

So for me, it’s all about being considerate of the other person. The phone, as I think about it, has always been a bother for me. Way back when I was in college and doing a lot of programming I would get upset when the phone rang and interrupted my train of thought. When you’re carrying a dozen variables around in your head and you have to stop to answer the phone, you get pissed! It sure didn’t put me in a good mood to take your call. But I was trained that I had to answer the phone if it rang. I didn’t have to like it though — and I didn’t.

So I am very much in favor of my smart phone. We’ve even gotten rid of our dumb phones (that would be land lines.) I have another app that puts the phone on silent from 8 pm to 7 am. BUT, I can designate numbers that will ring through when it’s on silent for the night. I have peace of mind that my children, my wife, my siblings and other relatives can get through any time they need to get through in an emergency and the rest of the world is going to voice mail. Works for me!

I may still call you from time-to-time. Most likely to return your call to me. But you’re more likely to get an electronic message of some kind. I think it is much more polite. Don’t you? So how about your outbound sales calls? How do you think they are really being received? Is that changing for the worse? In my opinion, yes, it’s changing for the worse. I think you’re largely wasting your time with outbound sales calls and outbound political calls. The boomers, who were trained to ALWAYS pick up the phone are either changing that attitude or leaving the business world and retiring. The young folks think you are rude if you call without warning. I agree with them.