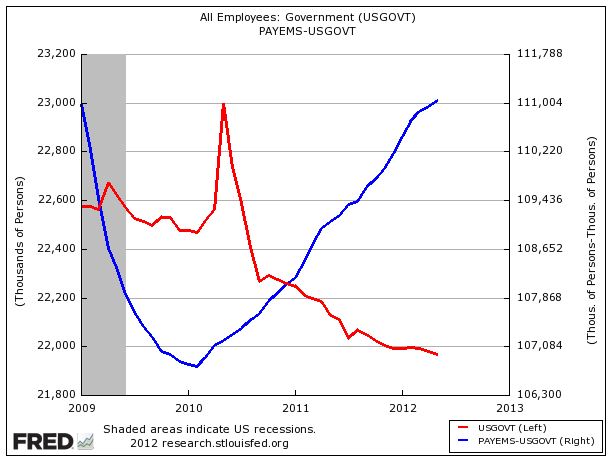 We’re in the middle of the “silly season”, and accusations, innuendo and flat out misleading comments are flying over all the media from left, right and center. Personally, I’m interested in what we can do to keep this very slow recovery (some would say jobless recovery) on track. I’ve come to several conclusions. First, we have such sticky unemployment for a couple of reasons, not the least of which is the continuing loss of public sector jobs. The other is larger companies cutting back and smaller companies not picking up the slack due to poor consumer consumption numbers. All the other “uncertainties” pale in comparison to the feeling that the consumer still has her/his wallet slammed shut.

As I’ve written in numerous posts on this site, my view is that we are not likely to see robust job growth like we’ve seen in the past. We have seen excellent improvement in productivity and of course we have also seen some of the more routine jobs move to lower cost areas in this global economy. What I see in this graph is that since the beginning of 2010 we have had slow but fairly steady growth in private sector jobs. That is quite in line with what the good folks at ITR were suggesting back in 2010. I also see that except for the spike in government employment for the 2010 census, government employment has been steadily declining. This is, to my way of thinking, a good thing – the “productive sector” is improving and the “non-productive sector” is shrinking. The private sector has added 3.9 million jobs since employment reached a low in July 2010. That averages to 164,000 jobs per month. By comparison, during the expansion years earlier this decade, jobs were added at an average of 94,000 per month. Why all the wailing? Because unemployment and underemployment is still very high – and my thoughts are that we will see that continue until we retrain and the entrepreneurs start hiring too.

There are other good signs besides employment. Retail sales are actually at pre-recession levels according to ITR’s data. Restaurant sales are at record levels and rising employment levels seem to portend for increased consumer activity.

Still, ITR Economics is predicting a “mild recession in 2014, but our long-term outlook is for general growth through 2017.” And they suggest that, “Leading with a positive attitude will be important to navigating the next year-and-a-half of political uncertainty and counterbalancing overly negative news reports.” I believe I buy that! How about you?