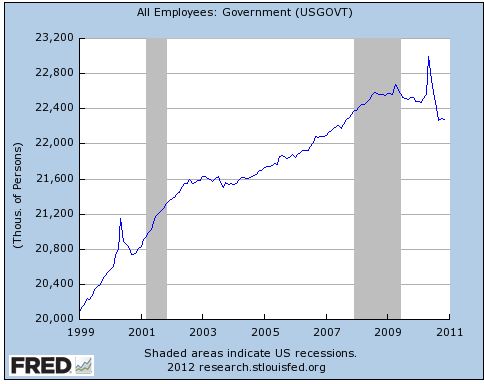 I’m guilty as charged and I’m confident that you are too. The old saying, “I’ll believe it when I see it,” is backwards. We see what we believe. It’s the way our brains are wired and we have to work pretty hard to make sure we are really seeing what’s in the data. This topic came up again during a dinner conversation that had “gone political.” I’m also guilty of knowingly baiting people to make the conversation interesting. At any rate, the discussion turned to the economy and then to the size of the federal government. The lament was that while private sector employment was in the tank, federal employee numbers are up. Remembering the chart below, I challenged that statement.

I knew this would create heated discussion because my “debating” opponent is quite libertarian in his views and very much apoplectic over the present administration. Almost as apoplectic as my liberal friends were over the previous administration. Interesting, don’t you think? There is very little real discussion around these things; many people seem to simply make statements that have no basis in fact but are based only on their ideological beliefs and wishes.

The discussion was not settled at dinner; instead, I was challenged by my friends to “show me the data.” It took me a while to find the graph I remembered, but once I did, I responded to my friends (yes, I have reason to assume they are still friends) with an e-mail that included this chart and the observation that the “peak in 2010 is caused by the hiring of many temporary workers for the 2010 census. Feeling “vindicated,” I hit the send button and waited for the, “thanks for the information. It looks like my impression was wrong because this data clearly shows federal employment is actually going down now” response. No such luck. The response I got from one friend was “As to the below, I don’t believe the statistics . . .” and from the other was a “cute” chain e-mail showing how pissing off the rich will eventually cause the rest of us to go without.

Frankly, I was very surprised at the response, not because I wanted to be “right” (although I am competitive enough to enjoy that sometimes), but because both of these friends earn their living using numbers, key indicators and other data to guide businesses to success. And they are very good at that. None the less, they appear blind in this case because they seem to feel it’s their obligation to hate everything about this particular administration since it is, by their lights, left of center. So don’t show me the data, and if you do and it doesn’t support my perception, then I will impugn the data. Wow. They wouldn’t let a business client do that!

Since this little episode, I’ve been thinking about how this affects our view of the economy and the recent “CEO Confidence Index” numbers. Trying hard to keep the political angle out of this (I pride myself on working very hard to be pretty much center in that regard, although many of my friends would label me left of center), I did my best to go behind the rhetoric and look at more of what’s actually going on in this regard. As far as I can tell, the most pessimistic view of unemployment is that those who really would work if they could find a job and those who are under employed add up to about 15% of the working population (WSJ This Morning 8/4/2012 podcast) 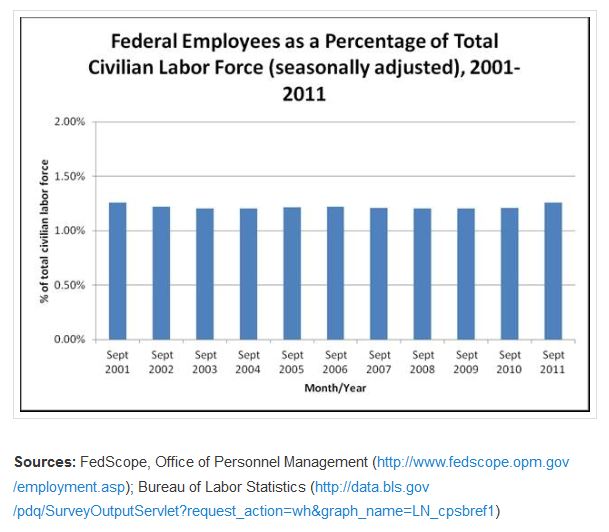 Still, even with this high unemployment that means we have 85% employed and able to consume products and services. And if you use the “official numbers” then the percentage of Federal Employees of Total Civilian Labor Force (seasonally adjusted) shows that the federal employment remains in a tight range between 1% and 1.5% (at about 1.26% in 2011). This can only happen if the federal employment rises and falls with the civilian employment.

Most of the economists I read are not at all optimistic about a fast increase in employment. The consensus I perceive is that we will see a so called jobless recovery and that is likely to be the way things are for the future as well as this particular recession. There are many reasons behind this view including the fact that we now use technology to leverage fewer workers and can afford to wait longer to make sure demand is there to support hiring new full time employees. My own view is that despite all the rhetoric and emotion, this administration and Congress (to the extent that the grid locked Congress has done anything) has done about the best that could be done given the fiscal and economic realities.

Regardless of your view of the unemployment issue and regardless of your feeling about the federal government, there are many things to worry about. David Wessel, over at the Wall Street Journal has some facts to share:

Here’s what I see. First, perception is reality. Second, according to Wessel, the gap between rich and poor is increasing. Finally, it appears that the “split” between the “haves” and “have-nots” is 5% to 95% respectively. Even in our democracy which is supposed to protect the minority from the tyranny of the majority, this is a dangerous situation. The process we use (civility is important) and how we resolve this economic and life-style challenge will determine the robustness of our country going forward.