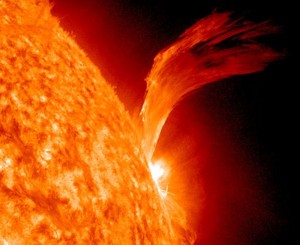 The sun makes my point. What point? I have been known to make the statement that “the universe is indifferent and knowable.” I usually am prompted to make that little observation when someone is complaining about how things aren’t “fair,” or how they have been “mistreated.” Generally, I shrug, make my statement, and suggest that the only way to get out of their situation might be to learn what they need to learn and take action because the universe doesn’t give a hoot about whether you survive or die. It just doesn’t care!

And then there’s the sun. We haven’t paid too much attention to it until lately. But now we are learning a great deal thanks to the many orbiting satellites we put around it to

study as much as we can about the life of the sun. And that causes us to “connect some dots” with the effects here on earth. Did you know, for example, that you get more vitamin D into your body from 10 minutes in the sun than you would get drinking 200 glasses of milk? That’s a good thing, right? Well, yes except for skin cancer, so now we shoo our kids out of the sun or slather them with cream to block out the harmful rays which also blocks out the vitamin D. But the sun doesn’t really care what we do, and neither does the universe.

Did you know that the sun has cycles? Yes, it has a regular cycle, that scientists have been following for more than 250 years. The cycle is 11 years long. And those cycles have (until now) dominated the earth’s weather patterns. Well, to be precise, there are four factors that dictate our earthly weather: 1. Our own atmosphere, 2. the Sun, 3. El Nino cycles and 4. Volcanic activity. Scientists have figured out the model using all four factors and have very accurately accounted for our weather patterns. Luckily, the sun has been very quiet as we built carbon content in the atmosphere, thus giving us a bit of a break in global warming. The question is what about the next cycle? If it is a normal peak, we will see the warmest temperatures ever recorded by man. If it is a “wimpy peak,” we will get a continued break in the global temperatures. One way or the other, neither the sun nor the universe cares about our comfort.

Finally, here’s a bit of information that really stopped me in my tracks (literally, I stopped running so I could go back and listen again). Science has proven that life has been on the earth for about 4 billion years. The sun should be relatively unchanged for another 5 billion years or so. However, the sun also increases its temperature by 10% every billion years or so and has ever since it was born. That means that in about another billion years, even without making any drastic changes, it will increase the temperature on the surface of the earth to about 700 degrees F. Life as we know it, and perhaps all life period, will no longer exist. That means life on earth has lived out about 80% of its allotted time – assuming we humans don’t kill ourselves in some other fashion first or speed up this demise by continuing our irresponsible activities. All of a sudden, the business and life “problems” I deal with seem pretty puny. So, as I said, the universe is indifferent and knowable. Sometimes the knowing gives comfort and insight into life here on earth. Sometimes the knowledge gained isn’t all that comforting. But it does help to put things in perspective!

While the politicians in Washington, DC played their silly games with the debt ceiling – perhaps permanently destroying faith in the American experiment or at least our credit ratings – the markets did what markets do without regard to what we might want. Link the shenanigans in DC with the global debt crisis and you have the perfect storm for a very permanent and painful change in our business models. It remains to be seen what the citizens of the world decide to do with their respective governments and economic systems. Yet, we as individuals can hardly just sit around and wait to see what transpires. Complaining won’t help. Screaming obscenities at the TV won’t help although that does seem to make one feel better! So what should we do?

I’m going to suggest that we take a hint from our scientists. First, I’m going to do my best to find out what’s so. I’ll use data, observations, and experiments to see if I can understand at least a little bit better this complex, interdependent economic system we’ve set up. We can’t go back, so we have to figure out how to go forward. I’ll build a theory and see how that works first to explain what I’m observing now, and then to give me some hints about how to chart a course to the goals I set.

So far, here’s what I think is so:

There are, of course, a whole bunch of other major things to add to the list, such as demographics, technology advances, etc. This list is one that addresses the complaints or statements I hear about “getting back to normal.” From what I can see – ain’t gonna happen!

Despite this list, I am optimistic that we will actually figure this all out, and more people will be living better lives in many countries than are now enjoying such a life. The pain will be the adjustment for those who have enjoyed privileged places up till now. Don’t get me wrong on this, I’m not saying that America’s best days are behind her. Not at all. I am saying it’s not at all unlike what happens in individual countries as technology “kills” one industry displacing workers who have to either re-invent themselves or slip into poverty and despair. Some people never stop weeping and wailing, but most pick themselves up, find out what is so, decide what they will do about it, and take action. I think the developed countries will, by and large, do just that. And so will our companies. We will re-invent ourselves. But first, we have to admit what’s so. Scientists do that on a regular basis, but it is slow going.

Neils Bohr said that “Science progresses one death at a time.” Old theories, old models die hard. I’m not wanting to hasten my own demise, so I will accept the new ideas on how a business needs to adjust rather than stick to my old, comfortable ideas. How about you? Are you leading your company to new ways of looking at the way business is done? Are you actively changing people’s world view? Are you seeking new data? Trying new things out? How will you take advantage of the globalized changes taking place?