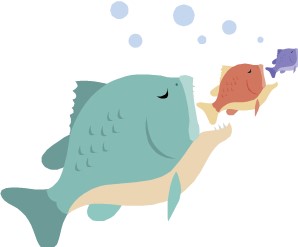 The oft quoted, misquoted, paraphrased and mangled quotation from Charles Darwin with respect to evolution is, according to my research, “It is not the strongest of the species that survives, nor the most intelligent, but the one most responsive to change.” It seems obvious to me (perhaps too obvious?) that the same is true for our human created organizations. Those who do not adapt to the changes in their environments are doomed to die. In many respects, I think that is what Jim Collins discovered and wrote about in his book How the Mighty Fall. Mr. Collins didn’t directly say so. Instead, he found five stages of decline: 1-Hubris born of success, 2-Undisciplined pursuit of more, 3-Denial of risk and peril, 4-Grasping for salvation and 5-Capitulation to irrelevance or death.

To my mind, the reasons underlying all of this is that the organization’s leadership is blinded to changing times. That may be one reason that Intel still survives today in such a capital intensive, fast paced and competitive market – they are a paranoid culture and paranoia keeps you from being blinded by success. If you believe that only the paranoid survive, then you will not sit back and rest on your laurels. Instead, you will perhaps take a quick victory lap and then move on the continue the race. No time to become content.

So for me, the question and challenge for leaders in today’s economy is how do you keep your people hopeful (not wildly optimistic), focused on the core values and strengths of the company, and at the same time insisting that you and they adapt to the new economic conditions? None of this is easy or well mapped out because we have not been here before. Which is what lead me to comment that we perhaps, as leaders, need to find talent that has been through some of the toughest times already. Many of today’s leaders have not been through “stagflation,” contracting markets, and customers without cash or not willing to spend cash. Indeed, very few U.S. leaders have been through extended periods of economic deflation. So hiring a few gray haired leaders or leaders from economies that have been deflating might make sense.

Darwin also said, ” Ignorance more frequently begets confidence than does knowledge: it is those who know little, not those who know much, who so positively assert that this or that problem will never be solved by science.” The attitude of those who “know little” leads them to over-confidence, hubris and a mighty fall. As leaders, we would do well to admit that we do not have all the answers and so pursue them; or as I like to put it, “Don’t grow it alone.” We would do well to widen our world view and avoid the “not invented here” syndrome. One doesn’t have to be proud or “save face” or be incredibly strong or stubbornly independent. One has to survive – it’s the call of the genes and it is in our organization’s DNA. To be that survivor, Darwin points the way – be adaptable, not fixed or rigid.