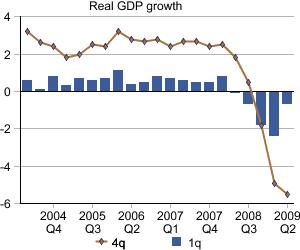 (Note: Updated 2/22/2015) Antony Ladd was recently referred to me by a trusted colleague. So Antony and I got together and came to know each other a bit. He’s got a unique view of what’s going on here in the U.S. He is from the UK. As we discussed his situation, it became clear that he is a very senior executive with a great deal of operational experience. He is amused by the “deer in the headlight” look of many American business executives these days.

Normally, that kind of debt reduction and savings rate would be great; now it is troublesome. And Antony’s view on all this? “What’s new? I’ve had to deal with thin margins, challenging employees and slow markets for most of my professional life.”

I agree and can see his point. Many, maybe most, of the executives I speak with are waiting for the consumer to begin buying again. The U.S. economy is based on consumption – I’m told that until recently about 70% of GDP has been consumer activity. They are worried that this might be the “new normal.” And they aren’t sure what to do about that. It messes up their business model.

By some standards, the British economy has been in the slow growth mode for many years now. Certainly it has not boomed like some other economies. Antony pointed out that what we are shocked to see in our own economy has been close to the norm for him and his peers in the British economy as well as some other European economies. So he doesn’t quite get the problem with the American executives. Complaining, opining, discussing and shuffling feet doesn’t get results. Actions get results. And while many companies have done a fine job at controlling costs, they are totally lost on how to increase the top line. Selling doesn’t work in this economy, it seems to just make people angry and in no mood to buy.

So what do you do next? Maybe hire someone who’s been through the mill already. Someone who knows how to build a company on thin margins, low revenue and poor capital environment. After this recession, we may have some pretty talented executives who figure it out and manage to get their companies to grow. We have already lost a whole bunch of companies and watched assets decline. On the other hand, to get through this and thrive, maybe we need to find folks who have had to deal with this kind of economy before.

That kind of talent is difficult to find. Many of our executives have never seen times this tough before, and I’m sure they never want to see them again. The large, international firms can surely find talent. They have folks who have lead big divisions in struggling economies abroad. But what about the small to mid-sized business; one that cannot call on a deep bench with long experience in struggling economies? Well, maybe you should consider hiring one of those “gray haired guys” that have at least been through the seventies. Or maybe you should hire a Brit.