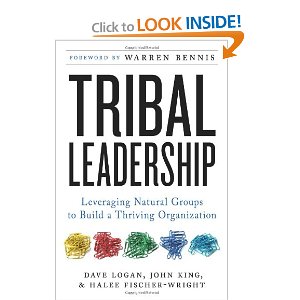 Tribal Leadership is perhaps the most significant leadership development book I’ve read this year. Logan, King and Fischer-Wright have written an outstanding book tracing the path of organizational and leadership excellence through an understanding of completion with past events and experiences. They explain the theory of Tribal Stages in the organization and how people move through them.

The authors break personal, organizational and leadership into five Tribal Stages, simply labeled 1 through 5. Organizations comprise small towns or Tribes. Like towns, the people in the tribe are all different, but they have more in common than not. Tribes help people survive the unknown. “Tribal Leaders focus their efforts on building the tribe—or, more precisely, upgrading the tribal culture.” That is how Tribal Leadership works: “the leader upgrades the tribe as the tribe embraces the leader. Tribes and leaders create each other.”

The authors go about explaining that a Tribal Leader must recognize, understand and be able to speak the language of each Tribal Stage in the organization. Most professionals skip Stage One. Only about 2% of American professionals operate here at any given point in time. The language of Stage One is “life sucks.” Street gangs and prison gangs operate mostly in Stage One.

Stage Three is the dominant culture in about 49% of the workplace Tribes in the United States. Here, the Tribal Language is “I’m great (and you’re not).” On their best days, doctors, attorneys and salespeople operate in this stage.

Stage Four is a long way away from Stage Three. Stage Four represents about 22% of the American workplace. The language in this group is “we’re great.” This is the launching pad for the Stage Five organization. The Stage Four folks “always” have an adversary, and they build Tribal Pride on vanquishing those adversaries. This adversary relationship is “hardwired into the DNA of this cultural stage.”

Stage Five represents less than 2% of the workplace tribal cultures. If Stage Five folks had a T-shirt slogan it would read “Life is great.” Their language revolves around infinite possibilities and potential. They don’t have adversaries. The tribe is going to do great things because it will make the world a better place. Teams operating at Stage Five produce miraculous innovations.

Here is a summary of the Stages (click on the image to enlarge):

Throughout the book, the authors use case studies (real companies) to provide examples of organizational stages and point to people we might know to demonstrate levels of Tribal Leadership. In addition, along the way, there are ample detailed “Technical Notes” and “Coaching Tips.” At the end of each chapter are “Key Points” from the chapter. For example, at the end of Chapter 1 The Five Tribal Stages, we find this summary:

Key Points from This Chapter

Part II of the book focuses on “Your Journey as a Leader: Leading Others Through the Stages.” Each stage has a continuum with early and late people. One cannot skip stages, but must go through them sequentially. As a leader, we must recognize the stage with which we are dealing and be able to speak that language as we move people along and hopefully, to the next stage. There are ample and practical tips on how to do so. One such Tip for leaders dealing with Stage Two folks is: “Coaching Tip: Have zero tolerance for Stage One behavior.” And there are also clarifications: “Technical Note: In our research, people are accurate in identifying the cultural stage of others. In fact, they are almost as accurate as trained observers using surveys, focused interview questions, and sociograms (methods of graphing relationships). There is one exception: People give themselves a two-stage bonus. People at Stage One think they are at Stage Three.

The model for setting strategy presented by the authors encompasses “ten thousand years of tribal wisdom that says it’s not smart to proceed as if things will go as planned.” And perhaps the most challenging thing to grasp is that the organization, to be a high performing Stage Five team, must have well understood and defined Core Values and a “Noble Cause” for existence. The Tribal Leader will understand how to build the adoption of Core Values and Noble Cause so that the team is all striving for the same outcome. The model is presented, pictorially, on page 214 of the book and makes the concept a bit clearer for the reader.

The appendices also provide a rich resource for reference. Appendix A is a “Tribal Leader’s Cheat Sheet.” Appendix B is a discussion of the research and how it was conducted. Appendix C is a collection of ways to reach the authors and their services. In short, get this book, read it, and start moving your organization toward the Stage Five Tribe.