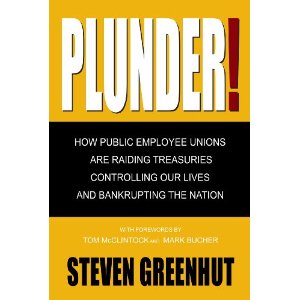 The subtitle of Greenhut’s book is; “How public employee unions are raiding treasuries controlling our lives and bankrupting the nation.” Steven Greenhut is a journalist who was on the board of the Orange County Register, a libertarian publication. His columns were always informative and detailed with facts, figures and names. He made no friends in the public workers unions, and stepped on a few political toes as well. This book is a compendium of his essays and continues the polemic.

Greenhut provides ample reason for every citizen to be concerned and upset over the raid on the public treasury represented by the overly compliant politicians and the aggressive unions negotiating only in the interest of their union members and not in the public’s best interest. Even if we allow that the unions should be working for their members, then the politicians should be working on our behalf and reasonable compromises should be reached. Such is not the case according to Greenhut. All of this is coming to light now as states struggle to balance budgets. Still, the same old noise is heard as citizens are threatened with loss of police, fire and other first responders instead of a serious look at what public employees we can manage to let go in order to get costs in control. The fear factor has always worked before and the entrenched parties are sure it will work again.

The book, while full of good information is a bit tedious to read at times due to not only the strident voice, but because it is a bit repetitive since it is a compilation of essays previously written. However, that also makes it very useful as a resource since the reader can pick a chapter and it will be pretty much self-contained with all the data and tirades in tact.

This is an important book, especially now. It will help us to see how recently in California, public unions have voted to authorize strikes, even though such strikes are illegal. There is a difference between public and private unions. As Greenhut quotes; “Call it a tale of two economies. Private-sector workers—union and nonunion alike—can largely see that without compromises they may be forced to join unemployment lines. Not so in the public sector” [Steve Malanga, “Unions vs Taxpayers, Wall Street Journal, 5/14/2009].

I recommend this book as must reading for the informed voter in the upcoming elections and referendums. No matter your political persuasion, it is very obvious that balance needs to be shifted back to paying public and away from the runaway unions.