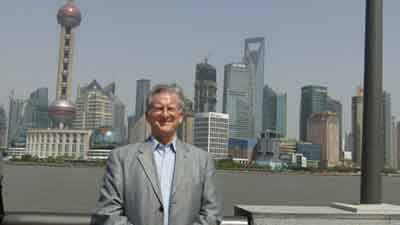 For many of you, this is “old hat.” For me, I just returned from my first trip to China and I was quite taken with the warmth, generosity, industriousness and curiosity of the people I met. Admittedly, I was extremely lucky to be squired around the country by a native Chinese colleague who knew all the “ins and outs” of the places, customs and language. Thank Goodness!

We began our trip flying direct from LA to Shanghai. What a beautiful city – yes smog, but still, a beautiful city. It is quite cosmopolitan in that there were many languages being spoken, the hotels were “Westernized” so to speak, and the infrastructure was relatively updated. I’m sure much had been done to prepare for the 2010 Expo which was promoted everywhere. Unfortunately, there was no way we could get into Expo, but we did visit the site and could see the buildings and speak with the people going in. So there I was, in Shanghai, at the Expo and had to rely on my wife to tell me about the opening ceremonies she saw back here on CNN. Timing is everything.

We spent two days in Shanghai, getting used to the time zone, meeting with potential contractors and planning for the following meetings. I was very impressed with the work done by the Electrical Contractor, it rivals any installation I’ve seen here at home – clean, precise, modern and very high quality.

After Shanghai and business there, we flew to Wuhan Airport and were met by Peter’s colleagues from his engineering days and also some family members. We had several very successful business meetings then went on to do some “tourist things” such as visiting a wonderful museum. On display at this museum is a strange instrument discovered in Hubei Province. It is a percussion instrument which is more than 2,400 years old as far as anyone can determine.

The instrument shown here is actually a replica made so that they could play it and demonstrate how it sounds. The “bells” are based on a 12 note scale. We attended the performance and it is my intention to post the video at some point. Check back here and I will hope to have posted a streaming video once I figure out how to do that!

From Wuhan, we went by car to Peter’s village at Macheng. What surprised me here was that among the very rural and modest people in the village, there was such a contrasting mix of the

old, perhaps even ancient way of living and the modern. So as we stood in the village among very humble surroundings, not far away was a cell phone tower and not far beyond that was a high speed rail line. So the contrast was very interesting. I found many folks from all walks of life using cell phones; thus avoiding the infrastructure needed to support land lines.

It will take me some time to digest everything I saw and heard, and also it will take time to edit through the videos and pictures I took while traveling in this beautiful country for the first time. My first impressions were very positive. As I mentioned, the people are warm, friendly and open. They are industrious and creative. And like people everywhere, they love their children and hope for them to “do better than we parents have done.”

PS: Note added 8/25/2013. Please take the time to read “What The U.S. Can Learn From China” by Ann Lee. It’s a fascinating look at the business, political and economic lessons from China.