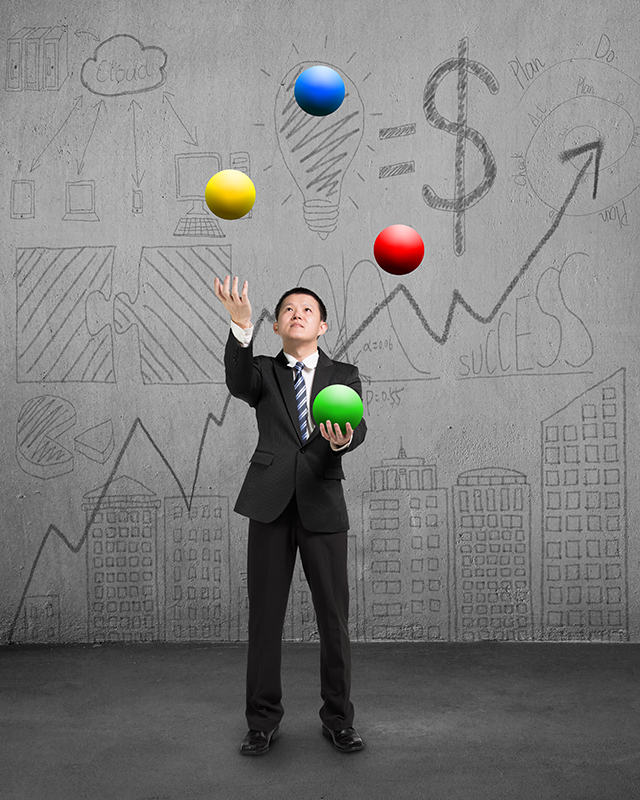 I admit to feeling inadequate. It seems as though I’m supposed to be able to multi-task, according to what I’m told by many people and according to what I observe others doing. But I can’t really. I try sometimes, but it just doesn’t work for me. I am not interested in “chatting” if I’m watching a television show (I rarely watch TV, it’s got to be something of immediate interest to me). I get annoyed if I’m deep in the middle of a spreadsheet, writing a blog post or wrestling a PC problem to the ground and the phone rings. I can’t read and also listen to music or radio or podcast.

On the other hand, my SO seems to be able to simultaneously watch TV, knit a sweater, read a book AND hold a conversation without missing what is going on in all three. I feel inadequate. However, it turns out that perhaps I need not feel inadequate. A host of studies is starting to shine the light on the fact that multi-tasking is not all that it’s cracked up to be. One study shows that even simple multi-tasking can cause projects to be late. And another shows that we do not learn as much when we’re multi-tasking, and what learning does take place is specialized and more difficult to recall when needed.

There are many other studies (just “Google” the phrase “multitasking + effectiveness”) that show that multitasking is not a good thing. From what I’ve learned about general brain function and from what I’ve experienced myself, the brain is a serial processor. We switch tasks, we don’t parallel process tasks. So multitasking (meaning doing multiple things AT ONCE) is a misnomer to begin with. We all know, intuitively and from practical experience, that when you drop a task for whatever reason, it takes time to pick it up again later. You have to refresh your memory on where you were and what you were doing in order to start the task again. I learned of the “overhead burden” of picking up a task during my college years as a programmer for the school. It sometimes took an hour to get back to the level of competence I had achieved while originally working on the program. Parameters and variable names had to be picked up again, and formulas had to be “re-understood” in order to continue the programming. Invariably, when there were significant errors, I could trace them to having been interrupted while in the middle of a program. I came to “hate” interruptions and learned to concentrate for hours and hours at a time.

The ability to concentrate for hours is a luxury few of us can claim to have in today’s environment. My focus greatly diminished when I left the engineering school and wound up on an open floor with 100’s of other engineers. All talking, collaborating and interacting in different ways on different projects. It was hardly any better to be in an office as a manager – the door was always open and people knew that. So if we can’t concentrate for hours on a project in a normal office (perhaps some engineering firms find ways to keep their engineers on task), then what are we to do? We must contend with not just phones and colleagues, but with e-mail, instant messaging, text messages, cell phones and 24 hour news demanding our attention these days. It’s getting worse not better. And now we are finding that it is not necessarily a good thing for us as far as mental health is concerned.

Today we are trying to do more with less: less cash expenditure, fewer people, fewer more responsive vendors and yes, even fewer more profitable customers. As we address our own firms and business processes, we might well ask how to increase productivity. We seem to be gaining some productivity simply due to the fact the our employees are working harder. They do not want to be out on the street with a resume, so they just put in longer hours, work from home when they can and try to juggle all their own tasks plus a whole bunch more from colleagues who were let go as cash was squeezed. Then there’s the personal life demanding time as well. We, as leaders, will soon pay the price. As the economy improves, and it will, our people will decide that they can afford to move to other companies where the work load is less demanding (whether true or not is irrelevant).

In a previous post, I suggested that we make sure we get our employees to stop doing some tasks that they insist on doing in order to appear less expendable to the organization. Part of what makes it so successful to have folks stop doing tasks that we can afford to let go is that it allows more time for them to concentrate on single tasks. However, that isn’t always what they do. Instead, they still work on multiple tasks in short bursts. I believe we need to not only eliminate all the tasks we possibly can (how many reports or inquiries do we ask for as leaders that totally disrupt the workflow and we never even think about that?), but we need to set the example for our employees by making sure we leave significant blocks of time for important projects. Since we can’t really parallel process (our brains simply cannot do that, we process serially and switch tasks), and since we know that task switching adds an “overhead burden” (like factory set-up time), then we need to maximize the effectiveness of our employees by minimizing task switching wherever possible.

Some companies try and set up e-mail processing times during the day and encourage people NOT to process e-mails at other times. There are “no meeting” days at some companies. If there is a company wide calendaring system that allows others to “invite” you to meetings, then employees are encouraged to block out “Personal Work Time (PWT)” on their calendars so that others will not schedule them for meetings. All of this is critical to retaining your top talent. I see signs of “burn out” in many companies who are running so close to the line that anyone out with the flu has major impact on customer deliverables.

So here are the questions (by now you know I end most posts with questions): How will you keep your talent when things turn around? What are you doing to keep employees mentally healthy by insisting on minimizing so called “multitasking?” As an individual, what are you doing to make sure you are working on major projects in significant chunks of time rather than task switching too frequently? Are you scheduling PWT? Are there times when your door is NOT open so you can concentrate without interruption? Do you silence your phone from time-to-time?