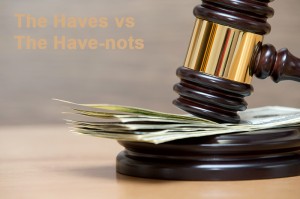 Unlike some, I am not one to advocate punishing the “upper class.” There are calls for punishing those who consume conspicuously, take home many hundreds of times more than the average worker and insulate themselves from those who “do the work.”

And there is a very wide disparity between some CEO pay and that of the workers. Over the long term, this disparity can be very dangerous for us all. Right now the outrage is over the bonuses given to the failed leadership of the companies receiving bailouts at the public trough. The discontent will spread if things continue on the present path.

History gives us a hint of what happens when the average citizen feels cheated or downtrodden or used; it isn’t pretty. And that feeling doesn’t even have to be “accurate” according to the objective facts. For example, the bonuses received by the executives at AIG and the big banks is very small compared to the whole budget and size of the bailout funds. And so the Executives are “surprised” at the outrage. Tin ears. It just isn’t right that executives and management of these bailed out companies should receive millions of dollars in bonuses with so many people out of work, with life savings greatly diminished and with families struggling to keep their homes. All attempts at justifying these moves will only enrage people further.

There are lessons here for all of us. Perhaps the most important is that those who are greedy and get caught will certainly “ruin it” for the rest of us in that they will prompt new rules and regulations. So we can be right, or we can be effective. To me, being effective in this case means not giving the government any reason to believe they need to step in to control excessive pay, out sized bonuses/commissions or monopoly action of any kind.

Perhaps the banks, credit card issuers, insurance industry and other companies serving the public will take note of the mood that the public is in and change their business model to be much more in tune with transparency and restraint. But somehow, I doubt it. So we may be in for a bunch of government intervention in our businesses. Nobody gains from that.