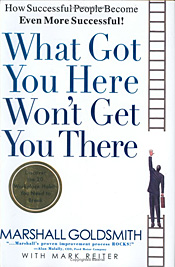 At the 2007 Vistage International Global Conference, Mr. Goldsmith presented a keynote speech which piqued my interest in his views on how successful people become even more successful. His book did not disappoint me.

Goldsmith writes in a clear and conversational tone. I had the advantage of having heard his voice and so could “hear him speaking” in my head as I read through his material. From the beginning, he sets a no-nonsense tone about what it takes to evaluate where you are and what you need to do to “get there”—a presumably better place. Goldsmith relies heavily on 360 degree feedback from colleagues and direct reports when he is working with an executive. He encourages his readers to do the same and provides tools in the appendices to help in that regard.

The short list for “how we can change for the better,” is: Feedback, apologizing, telling the world of your discoveries, listening, thanking, following up and practicing feed-forward (seeking ideas on how to improve the skill you pick to improve; such as asking a colleague for two ideas on “how I can become a better listener.”

Besides being concise, well organized, and to the point, Goldsmith regales us with wonderful stories from his many years of coaching experience. It seems that there are at least a couple of “nuggets” in each chapter. For example, from the section on “Be Your Own Press Secretary,” there is this statement: “If there’s one thing we’ve learned in this noisy media age, it’s that simple, un-nuanced messages break through the clutter and hit home with high impact. (I’m not saying that’s always a good thing, but it’s a fact of life. Deal with it.” Another gem I enjoyed was; “As a friend wisely noted, ‘Forgiveness means letting go of the hope for a better past.'” And on Feedback, Goldsmith had this to say, “It’s not hard to see why people don’t want to hear negative feedback. Successful people are incredibly delusional about their achievements. Over 95 percent of the members in most successful groups believe that they perform in the top half of their group.”

This is a must read for any leader who is serious about advancing his or her own career and coaching others along that path.

Get the book at Amazon.