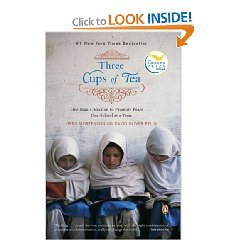 Once again my colleagues made a fantastic recommendation for a year end reading gift for my CEO group.

After reading Mortenson’s book, I felt as though I must be the only person in the world not aware of the work he has been doing. How did I miss it?

Failing to make it to the top of K2, getting lost on the way down, and being rescued by a Pakistani man was the serendipity found only in the stuff of fairy tales; yet it happened and certainly the world is a better place for it.

It seems to me that Mortenson has single-handedly put the lie to the ugly American by taking care to learn the customs, language and needs of the people he chose to serve. The many bureaucratic roadblocks, political sidetracks, lack of funds and weather delays did not keep Mortenson from moving forward with his pledge to build a school. And then another. And then a couple more until now 100’s have been provided.

“Here (in Pakistan and Afghanistan), we drink three cups of tea,” said Haji Ali, Korphe Village Chief, Karakoram Mountains, Pakistan. “The first you are a stranger, the second you become a friend, and the third, you join our family, and for our family we are prepared to do anything – even die.” Mortenson became family to many of the far-flung village people in Pakistan and now Afghanistan. As he has demonstrated that he would risk his life for them, they in turn have shown a willingness to protect him and guide him through the challenges of trying to help those for whom few are willing to speak.

This book is a compelling read and difficult to put down. It is both an adventure story and a testament to the good that a determined compassionate person can accomplish with the right amount of love and determination. It shows, in a non-partisan way, the path we must take to work for peace and marginalize the extremists on all sides of the discontent and modern terrorist story. This is a must read book for anyone interested in understanding what is going on in the global community today.

Click on the book image to view on Amazon