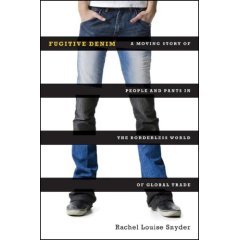 A month or so ago, I received a call from an excited colleague who was wondering if I’d be willing to review a book for her. It seems her friend had just successfully published a book and was to begin publicizing it in a round of events. My reply was, “Sure, have the publisher send me a copy.” A couple of weeks later, a review copy of Fugitive Denim arrived and I thought, “What have I done? This may be tough to get through.” Well, instead I had a tough time putting it down. Far from a dry treatise on globalization, I found myself immersed in the lives of several characters and wanting to know more about them and how they were “getting along.” Ms. Snyder, in discussing her book with friends took to joking that it was “about the people in your pants.” Indeed! This intriguing story about the people who make our clothes educated me on some of the intricacies of globalization in general and the garment industry in particular. The peoples’ stories are compelling; from Mehman Husseinov who loves cotton, to Rogan who designs denim garments with soul and style to Alison and Bono (Paul) Hewson who want to support workers worldwide and Scott, the auditor who said, “The only boundaries that exist, exist in your own mind.”

Snyder is an award winning (Overseas Press Award) investigative journalist. She has written for the New York Times Magazine, Slate, Glamour, Jane, Salon and the New Republic. Her considerable skills are on display in this book. She writes in a clear, concise manner with ample footnote and end-note support. Yet she has managed to weave story that wends its way from Cambodia to Azerbaijan to New York and points in between. Her ability to use an incredible amount of detail to build her characters successfully propels the story forward. Snyder has managed to put a wonderfully human face on a very complex issue of pitting our ecosystem against the undeniable forces of globalization and consumerism. From factories to responsible buyers, the story jets from country to country, from person to person, and from celebrity to unsung hero.

True to her profession, Snyder avoids preaching or forcing conclusions. Rather she puts facts in front of the reader, with the references for validation, and magically mixes the facts with an incredibly creative wit. Fugitive Denim makes the reader laugh, wonder, and shake her or his head at the sheer complexity of the treaties, quotas and labeling systems we have created.

Fugitive Denim is an intelligent, compelling and well documented story that is a cut above other books on the pervasive effects of globalization in our lives. This is a must read for any government official or business executive involved in international sourcing or commerce – and who isn’t these days?