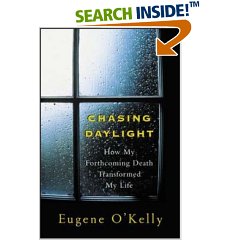 I picked up this small book with trepidation since the sub-title is “How My Forthcoming Death Transformed My Life.” It’s not that I fear death or want to ignore the inevitable; it is that I did not want this to be a book that trivialized the ultimate rite of passage with platitudes and superstition. I need not have worried – and I was put at ease by the opening quotation from Socrates:

“For anything that men can tell, death may be the greatest good that can happen to them: but they fear it as if they know quite well that it was the greatest of evils. And what is this but that shameful ignorance of thinking that we know what we do not know?”

O’Kelly describes a full, but not unblemished, life; one that many would aspire to build for themselves. He attained his dream job, Chief Executive Officer of KPMG, had a life partner he deeply loved, and a wonderful daughter who would become wise beyond her years during the coming ordeal. Yet he “felt blessed” when he was told he had only three months to live. While this may seem to be crazy, he goes on to explain that he was given a chance to “unwind” his relationships. That is, to have closure, completeness, and to cement the positive aspects of that relationship in his own mind and that of his family, friends and colleagues.

Once over the shock of this completely unexpected diagnosis, O’Kelly and his wife, Corinne, put together a comprehensive plan for his last three months. The amazing attention to detail and the thoroughness of his approach to death allowed him to pack his last days with meaning, substance and joy – along with the inevitable tears and pain. And for those of us not privileged to know O’Kelly personally, he left this amazing and insightful book. It is a “surprise,” as O’Kelly himself defined one – “A surprise, I think, is really just an inevitability that we’re too unsophisticated to predict.”

I have the honor and privilege of working with a great group of chief executives. This holiday season, each will find a copy of this book at her or his place around the table.