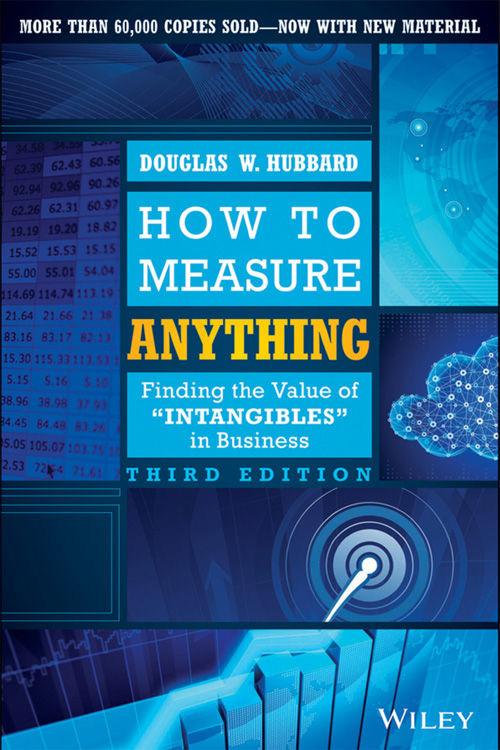 Finding the value of intangibles in business:

In Part I of this review, I introduced the notion that in a past life, I had often had the discussion of “the financial risk of adding a salesperson” to a territory to grow revenue and market share. It seemed there were too many variables to consider and, being overwhelmed with possibilities, we most often used simplistic “rules of thumb,” and in the end, went with our intuition. If things didn’t work out, we could blame things such as product not being introduced on time, the wrong sales candidate was selected, sudden changes in customers’ design needs (always reliable in the microcontroller/microprocessor design field), competitors beating us on price and/or features, etc. There needs to be a better way; and of course, there is. In Part II of this review, I will attempt to give you a “quick and dirty” actual application using one of the methods Hubbard gave us in this excellent text.

As I read Chapter 6, Measuring Risk, in Hubbard’s book, my imagination went wild with all the possibilities I missed during my various positions in Engineering, Sales, Marketing, Business

Process Reengineering, and Operations. Shortly after reading How to Measure Anything, a client suggested they needed some insight into analyzing the risk of hiring a salesperson for new territory. Armed with new tools and delighted to have a “real-life” problem on which to work, I immediately agreed to help out. I began by asking a whole bunch of questions such as; what are the sales in the territory now? What are your typical gross margin numbers given a mix of products? What is the typical cost of goods sold? What do you think you will have to pay for salary, commissions, benefits, additional expenses? What do you think the additional sales will be for the successful salesperson? Of course, the response I got to many of these questions was, “I don’t have a clue.”

Yet, in reality, the client’s team did in fact “have a clue,” we just needed to work a bit to refine their estimates and guesses to meet the “90% confidence level” requirements (see Part I of this review and of course the book itself). I made clear that we were going to assess the financial risk based on the assumption that they would perform due diligence in hiring the right person and recommended a Vistage Resource to assist them in doing so. Based on hiring a top-notch competent salesperson, we then proceeded to build the simple Monte Carlo model (with apologies to Mr. Hubbard) in the accompanying Excel spreadsheet – MonteCarlo_PartII_Sample.xls. You should be able to download this spreadsheet and follow the example. A Monte Carlo simulation uses our computer to generate a large number of scenarios based on probabilities for inputs. In each scenario, a specific value would be randomly generated for each of the unknown variables (ranges). For more in-depth understanding, turn to Chapter 6 in the book. Essentially, each row (there are 10,000) is a random mix of the variables to produce a unique result. The rows will later be “bucketed” into a histogram to help evaluate the risk.

Guidelines were that this company, let’s call them ABC Products, wished to incentivize the salesperson to sell more and so were motivated to pay a higher commission rate for more sales, and they wanted this highly-compensated person to have an idea of their potential earnings. They would provide both a reasonable salary and benefits on top of the commissions; benefits would include a car allowance as well as the normal insurance, medical policies, personal time off, etc. You can see the “model” by clicking on the “MC Model” notebook tab. Other assumptions were that we would try to keep the model relatively simple, that we would use a “normal distribution” to match our 90% Confidence Interval and that the new salesperson would be “up and running” for the purposes of the model. It was noted that they may have to actually have two phases with the first phase a “learning period” of perhaps six months to allow the salesperson to learn ABC Products, policies, strengths and weaknesses. The model represents phase two when the salesperson is “up to speed.”

After “calibration” discussions and some re-thinking on compensation, the following model was created (numbers shown are not real to protect the confidentiality, but the model applies):

You will be able to figure out the model quite simply by looking at the formula in each cell. In short, depending on the level of the individual to be hired (more experience, relocation, past successes, etc.) different commission levels would be written into the contract. It was established (with 90% confidence), based on history plus estimates for the coming year, that the region would generate between $50k and $200k without a salesperson added. Likewise, it was estimated (with 90% confidence) that a competent salesperson would generate between $600k and $2,500k of additional revenue. While ABC Products

wanted to be generous with commissions, they did not want to pay for the minimum expected revenue increases, so they paid no commissions until the total revenue reached $800k for the region even though they were 90% confident that the salesperson would generate a minimum of $600k additional revenue and the region would generate a minimum of $50k on its own. So if both minimums were to occur, the total revenues would be $650k and no commissions would be paid.

As we look at the results, we see that first; the salesperson will earn a minimum of $100k and has the potential to earn as much as $375k. Second, we see that the company will see minimum risk – a 1.43% chance that it will lose money by putting in a new salesperson, leaving a whopping 98.57% opportunity to either break even or earn additional revenues by adding a new salesperson. We can say all this with a 90% confidence interval assurance.

The power of modern tools like Excel means that we have little reason to claim we can’t measure (i.e. reduce the uncertainty) the risk versus reward in some fashion. Using the “Random Number Between” function in Excel, calibrating ABC Products’ team members and generating variable ranges, we were able to quickly put together a Monte Carlo model that helped us evaluate the financial risk versus reward for putting in a competent new salesperson. Oh, the results? After a few moments of second-guessing their 90% confident ranges for the variables because of the sub-prime meltdown, the conclusion was it is a “slam dunk.” Of course, you begin the hard work of searching for a competent salesperson, the upside is too good to pass up!

As a companion to this very well written book, there is a web site that provides additional information, downloads, and examples – www.howtomeasureanything.com.  How to Measure Anything should definitely be on every business owner’s and manager’s desk.

Back to Part I. Click to view on Amazon.