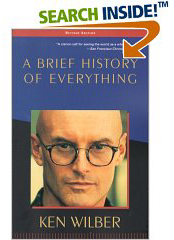 This is the second book I have read of the many that Ken Wilber has produced. I admit to struggling with the concept he is presenting, but that has nothing to do with his writing which is clear and concise. I suppose it speaks to where I am, presently, in evolving my own consciousness.

Wilber employed a question and answer format with this volume and it worked well for me. The “interviewer” posed questions and Wilber answered them. This comfortably leads the reader through the maze of human consciousness development as Wilber sees it. Beginning with his concept of the “Kosmic Pattern” of the twenty connectors, Wilber winds his way to higher levels of consciousness using the concept of holons.

I have no difficulty following the holon metaphor in the “material world” view. It’s very straight forward – particles combined to make atom holons. Atoms combined to make molecule holons. Molecules make cell holons, etc. If we destroy a holon, then we destroy all holons “above” it. Without molecules, we and much of the physical world as we know it simply goes away. This is not a difficult concept.

Applying this concept to human consciousness (not the physical body which of course we can understand comprises cell holons of many different types) is where I struggle. Wilber states that “So even a person born into a grand and glorious and global vision-logic culture nevertheless begins development at the physiocentric, then biocentric, then egocentric levels, then moves to the sociocentric levels, then moves to the postconventional and woldcentric levels. There is no way to avoid or circumvent that general process.” This then leads to the concept that therefore, we cannot, as we achieve higher level of consciousness, denigrate or “kill off” the earlier stages of consciousness. Wilber posits that each stage of development becomes the basis for the next holon level. To destroy a holon at one level would presumably destroy all “higher” holons.

In terms of a discussion of religion or other human institutions, this implies that we will forever be subject to fellow beings who remain “stuck at one level or another” and all that that implies for the human condition. We cannot short-circuit the development. Of course there is hope that as long as we understand the process, we can ease people through it by perhaps inculcating keeping an open mind, as much as possible, at each stage. The drive to understand that “there is something beyond my present view” may keep us skeptical or agnostic enough to allow progress to higher consciousness.

I am still trying to wrap my mind around all that Wilber’s model means to humanity. There is a part of me that feels as though we are doomed to lower levels of awareness and consciousness because we all “have to start at square one.” On the other hand, I have much hope that if we can only embrace this model, we will recognize that wherever we are on the path, we have more consciousness to achieve. We can’t begin this hard work unless we at least seriously consider what Wilber has to say. Must read for any sentient being who aspires to higher levels of consciousness and understanding.