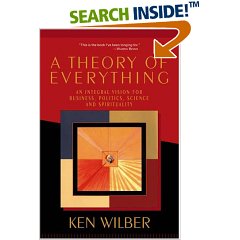 I have long been a student of human evolution, science, and spirituality. Finally, I discovered Ken Wilber and began reading with one of his latest books, A Theory of Everything (T.O.E.). I was amazed at how this all rang true for me, and how it applies to our personal as well as professional lives.

This is not an easy read. I found myself having to go back over material already read and rethink it for myself. But the exercise is well worth it. Wilber starts with the statement that “We live in an extraordinary time: all of the world’s cultures, past and present, are to some degree available to us, either in historical records or as living entities.” From there, he develops his theory of everything, which by his own definition “any truly integral vision or T.O.E. will have to reconcile, one way or another, the relation of science and religion.” By the end of this book, Wilber has made a fairly solid argument for having accomplished just that.

I have to admit that my fairly structured mind had to be jarred out of its normal mode of world view, but once I got by my own mental hurdles, T.O.E. made a great deal of sense to me. Beginning with Don Beck’s Spiral of Development, Wilber extends that work to eventually become an all inclusive model for second-tier consciousness – and beyond. Besides my own limitations, one of the more difficult issues in reading this text was the extensive use of endnotes, requiring much flipping back and forth between the appendix and the text.

There are several ideas I find disheartening though. “. . . there will always be a large population of humanity at the magic and mythic waves, which are usually associated with traditional religion. Thus, traditional religious beliefs will never completely go away because everybody is born at square one.” And a second disheartening statement is that “Those who had hoped that we were rid of all that silly religious stuff are probably in for a rocky ride.” While I understand his point, I still find it deeply disturbing that we will always be starting at “square one.” I hope this proves not to be true in a practical sense, even if it is technically the case. I hope we can somehow short circuit the normally long educational process to get to second-tier consciousness. We are able to do that with many other of our “new world views,” and so hope springs eternal.

A second disturbing realization for me is that I must rethink my world view of the “interdependent web of all existence of which we are a part.” The consequences of Wilber’s T.O.E. is the requirement that I now recognize that “it is not true that human minds (the noosphere) are part of nature (or the biosphere), but rather the reverse.”

Live and learn. If you wish to challenge your own world view, this book is a great place to start. You can also learn more at Ken Wilber’s Personal Web Site.